ILC | Second report on the protection of the environment in relation to armed conflicts by Marja Lehto, Special Rapporteur 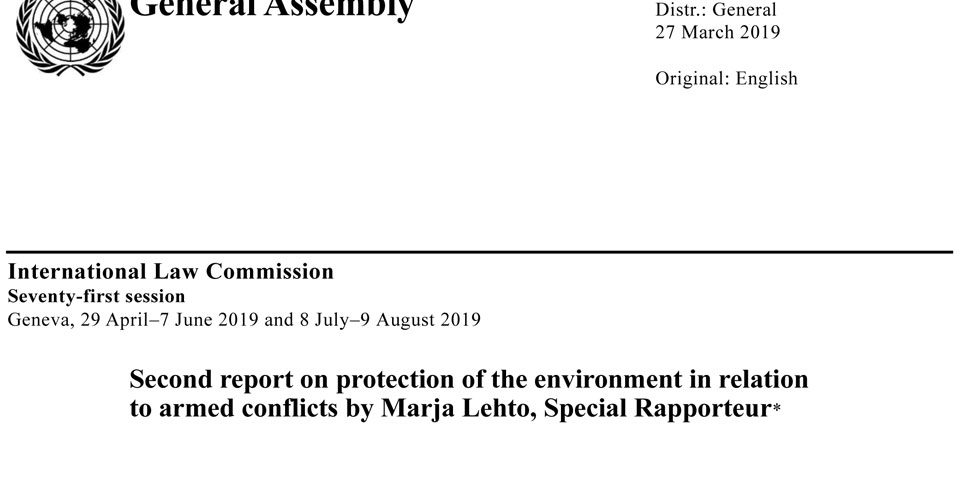 The 5th report from the ILC on the protection of the environment in relation to armed conflicts, and the second by Special Rapporteur Dr Marja Lehto deals with state and non-state responsibility for harm

Chapters III and IV, in line with the priorities endorsed by the Commission and the Sixth Committee, deal with certain questions related to responsibility and liability. Chapter III discusses the responsibility and liability for environmental damage and depletion of natural resources in conflict caused by non-State actors. Such responsibility may be of a civil or a criminal nature. While in section A, dealing with non-State armed groups, the main focus is on individual criminal responsibility, section B, on multinational enterprises, as well as private military companies as a specific category of private companies present in conflict zones, looks at a number of accountability mechanisms, including civil liability suits.

Chapter IV addresses certain questions of State responsibility and liability. The general rules of State responsibility for wartime damage are discussed in section A, with a particular focus on challenges arising from the presence or involvement of multiple States and other actors in current conflicts. Section B addresses certain questions specific to the valuation and reparation of environmental damage, while section C adds a few examples related to remediation without the establishment of responsibility.

Chapter V is dedicated to the consolidation of the set of draft principles by gap-filling. The first of the three questions addressed in section A is the proposal made during the Commission’s seventieth session to include in the set of draft principles a principle modelled on the Convention on the Prohibition of Military or Any Other Hostile Use of Environmental Modification Techniques. The subject of section B is the Martens clause, which has been referred to several times in the context of the present topic. Finally, the different approaches to the definition of the environment are discussed in section C, and a proposal is made to harmonize the references to the environment in the draft principles.