Calculating the environmental benefits of peace in Colombia 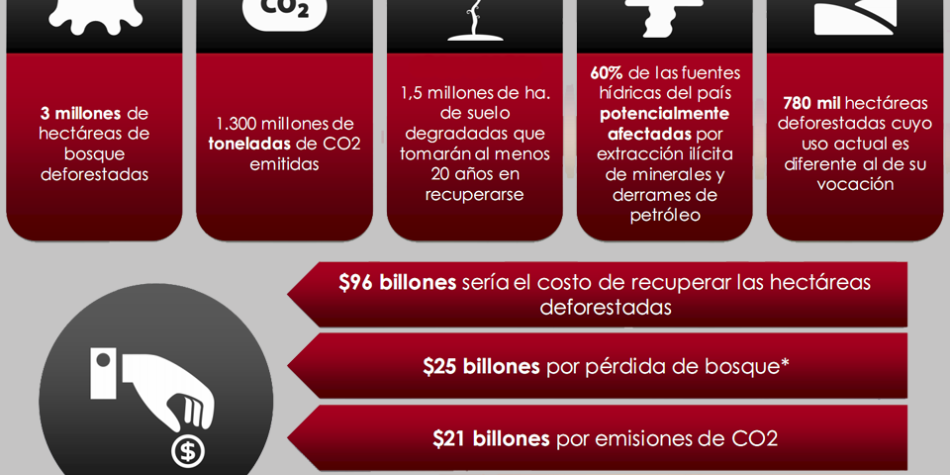 The social, environmental and economic costs of Colombia’s conflict have been enormous, and a new study has revealed the benefits from peace.

Colombia’s environment has suffered widespread and severe damage as a result of half a century of armed conflict. With a peace agreement with FARC on the table, the government has been reviewing the financial costs of the damage – and the economic and environmental benefits of peace. By its own calculations, an end to the conflict could see the government saving US$2.2bn a year in addressing avoidable environmental damage. But a sustainable environment will first require a sustainable peace.

The instability that led to Colombia’s 50-year conflict has its roots in 1948, when fighting erupted between the military wings of its Liberal and Conservative parties. From 1964 onwards, it developed into a three-way conflict between the army, paramilitaries and the newly established FARC rebel group. Into this maelstrom would later come the narco-traffickers. The conflict has been characterised by gross human rights violations and a death toll still that is still unclear, with estimates of in excess of 200,000 dead.

Natural resources have been exploited by all parties to fuel the conflict. Ecosystems have been harmed by attacks on oil infrastructure and the use of aerial defoliants for eradicating coca and poppy crops. Gold mining and coca production have released pollutants, threatening human health and rates of deforestation and erosion have been significantly higher in contested areas. Colombia’s environment is sensitive, with its diversity of habitats and flora and fauna making it one of the world’s ‘megadiverse’ countries, hosting 10% of the planet’s biodiversity in 314 distinct ecosystems.

Counting the environmental cost of the conflict

With the March 23rd deadline for the peace deal between the government and FARC approaching, albeit with the UN’s envoy highlighting the difficulty in realising the agreement over the FARC’s disarmament, thoughts are turning to the benefits of peace. On March 10th, the government’s national planning department – the Departamento Nacional de Planeación (DNP) – published a major study on the environmental dividends peace could bring. The DNP’s director, economist Simón Gaviria Muñoz argued that: “Colombia has to be at peace with nature,” and that for every year of peace, Colombia would save COL$7.1bn (US$2.22bn) by avoiding the costs of the environmental degradation and pollution linked to the conflict.

The launch event for the report, which was co-hosted by the UNDP, saw the facts of the conflict’s environmental legacy laid bare. Attendees heard that between 1990 and 2013, 58% of Colombia’s deforestation occurred in municipalities affected by the fighting, with 3m hectares of forest lost – an area the size of Belgium. It was argued that the conflict had led to 1.3bn additional tonnes of CO2 emissions and caused the degradation of 1.5m hectares of land, which would take at least 20 years to recover.

Attacks on oil facilities during the last 35 years had caused 4.1m barrels of oil to be spilled – the equivalent of 16 Exxon Valdez disasters – and the 757,000 barrels released between 2009 and 2013 had affected soils and water in 129 of Colombia’s municipalities. Some 86% of gold production in Colombia is unregulated, making Colombia second only to China in mercury releases into the environment, and as a result of oil spills and illegal mining discharges, 60% of the country’s water sources are potentially at risk of pollution.

Speaking at the launch of the study, Colombia’s President Juan Manuel Santos lamented the environmental impact of the conflict:

“The armed conflict that has affected us all has been a conflict against our natural resources. It has been a real ecocide.”

He announced a 15-year post-conflict plan to increase environmental protection and fight climate change – Sustainable Colombia – which aims to “maximise the environmental dividends of peace”. The plan will be supported the Inter-American Development Bank.

Assessing the financial costs of wartime environmental damage at times seems as much art as science. Where it has been done for previous conflicts, such as the 1991 Gulf War, the tendency has been to cost up the direct costs of recovery, for example cleaning up an oil or chemical spill. Colombia’s approach is somewhat different in that it seeks to determine the annual savings across a number of environmental problems associated with the conflict. This approach reflects more recent thinking about the financial value of ecosystem services and the growth of emissions trading schemes.

The methodology used by the DNP to calculate the costs to human health and the environment that could be avoided if the peace agreement is reached utilised various data sources. It crunched and costed official government statistics on deforestation, illicit crops and illegal mining; data from the oil industry on spills and estimated the health burden of mercury releases using studies from the WHO and World Bank. The figure of COL$7.1bn (US$2.22bn) for avoidable annual environmental costs was reached by totalling:

In addition to the potential savings from avoiding these forms of harm, the DNP also addressed the economic and environmental opportunities that could stem from the peace agreement. These considered staffing, securing and improving protected areas, reforms to the rural economy to promote sustainable practices and protect biodiversity, and the expansion of Payments for Environmental Services – although these have not been without controversy in some countries. DNP Director Simón Gaviria Muñoz argued that:

“By taking care of our forests, Colombia can be a world leader in the new ‘bio-economy’ which, according to OECD estimates in 2030 could represent about 2.5% of GDP in our countries.” One other area of potential economic growth identified in the report was that of eco-tourism – a field where Colombia’s megadiverse status could provide significant opportunities.

Colombia’s peace process is not yet a done deal but it is widely supported by an international community overwhelmed by conflicts and crises. While the DNP’s report is aimed at contributing to the case for peace, it also serves to highlight the economic, health and environmental burden of wartime damage, resource exploitation and the collapse of governance. Internal armed conflicts pose particular challenges to environmental protection during conflict, challenges that are largely under-addressed at present, as demonstrated by the reluctance of States to engage non-state armed groups on environmental protection.

While FARC will likely stick to the Havana deal, if the disarmament issue can be resolved, the ELN rebel group remains outside it and last month were continuing to attack oil infrastructure. If President Santos’s Sustainable Colombia project is to be truly sustainable, it may require all actors to be brought into the deal.

Doug Weir manages the Toxic Remnants of War Project, part of a global coalition of NGOs advocating for a greater standard of environmental and civilian protection before, during and after armed conflict. The project is on Twitter: @detoxconflict This blog was first published by New Internationalist.