Five years on: lessons learned from the environmental legacy of Syria’s war 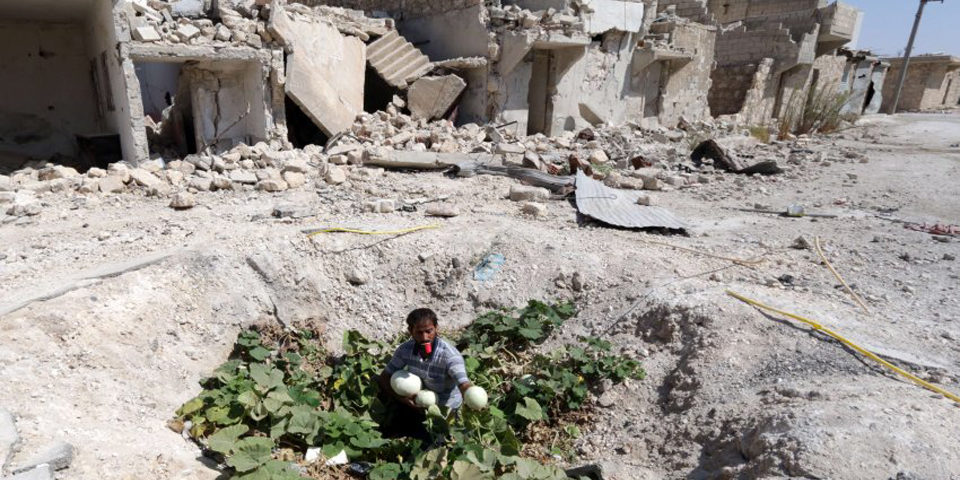 The environmental impacts of Syria’s war are widespread and severe, here are five priorities to help minimise civilian harm.

This week the Toxic Remnants of War Network commemorates the beginning of the conflict in Syria. The devastation wrought upon the country has cost the lives of hundreds of thousands of civilians, wounding many more and displacing millions across the region and beyond. They have left behind cities turned to rubble, ravaged towns and barren lands scarred by fighting.

The environmental dimensions of Syria’s conflict

A recent study on Syria undertaken by the World Bank noted the enormous damage to health facilities, critical infrastructure, education and the economy. The conflict has not just been a humanitarian tragedy; it has also been a tragedy for Syria’s environment. Prior to the war, climate change and weak environmental governance had already had a disastrous impact on Syrian society, exacerbating the impact of severe droughts, and degrading natural resources, protected areas and biodiversity.

Five years on, what lessons should be learned from this conflict? And how can the international community, humanitarian and environmental organisations work towards strengthening the protection of civilians from the toxic remnants of war and the health risks posed by wartime environmental degradation in Syria?

During the last three years, PAX has been monitoring the conflict on a limited scale. As part of our engagement in the TRW Network, our aim has been to build up an initial picture of the type of environmental threats the conflict has caused. Throughout this time, PAX has discussed its findings with environmental experts, international lawyers, UN agencies and humanitarian organisations working both on the Syrian crisis, and the wider international discourse of protection of the environment in conflict. The observations below, which have stemmed from our work, are intended to encourage debate on promoting more effective responses to the environmental and public health impacts of conflict.

1. Recognise the environmental and humanitarian impact of armed conflict

Historical post-conflict environmental assessments undertaken by the UN Environment Programme (UNEP) have revealed the extent to which conflict can adversely affect the environment and threaten public health. Our monitoring data suggests that, not only has the conflict directly affected the lives and security of Syria’s population, it will also have long-term consequences on the environment civilians live and work in.

In October 2015, PAX published Amidst the debris, a desktop study providing an overview of the environmental and public health footprint of the conflict. The report highlighted a range of environmental concerns, such as damage to the industrial sector, including oil refineries, which are likely to have resulted in acute and chronic health risks to civilians. Beyond the industrial sector, risks have also been created by the collapse of environmental governance, and with it waste collection and management, the millions of tonnes of conflict rubble caused by the targeting of cities and towns, and the potential health risks from exposure to munitions residues.

Knowing where health risks might occur requires the timely identification of potential pollution hotspots. This information is crucial to inform direct responses through local partners or government structures or, in the aftermath of the conflict, to speed-up assistance and remediation. Monitoring environmental risks in conflicts as they unfold requires capacity and expertise but is becoming increasingly feasible through a range of data sources. For example through remote sensing, which is sporadically undertaken by UNOSAT, or through the use of Open Source Intelligence (OSINT), as has been done to identify attacks on oil facilities or as is sometimes done by branches of humanitarian organisations such as the REACH initiative. Citizen science undertaken by local actors could also provide unique opportunities to collect and share information on environmental damage.

The Joint Environmental Unit of the Office for Coordination of Humanitarian Affairs (OCHA) and UNEP recently brought together more than 25 experts from various UN branches and humanitarian NGOs to discuss a response to the environmental dimensions of the Syrian conflict. This included the role of monitoring and how cooperation between humanitarian agencies could be improved.

The Syrian crisis has generated an enormous response from humanitarian actors supporting refugees, providing aid, shelter and WASH operations. Within these operations, staff or local partners have already been confronted with environmental problems, ranging from waste management to polluted water resources, contaminated soil and exposure risks from hazard substances.

At times, recording and responding to environmental risks is under-prioritised in humanitarian operations. However, resources are available to help identify potential impacts, improve response mechanisms and to encourage data sharing. Increased information sharing between UN clusters, as well as among humanitarian organisations, could contribute towards better information collection. Where needed, support and advice from environmental experts could help guide local partners in response work or risk education.

4. Integrate the environment into recovery plans

With peace talks underway in Geneva, it is time to begin considering how environmental recovery can best be integrated into the rebuilding of Syria. It is estimated that the conflict has cost Syria US$1.2tn. More than half of all residential areas have been destroyed, creating millions of tonnes of rubble. The industrial sector and critical infrastructure have both been severely damaged. Rebuilding should take into account: a) data on the location of environmental hotspots; b) contingency plans for dealing with hazardous wastes; and c) community level risk awareness about potential environmental hazards.

The private and industrial sectors and other relevant actors from the Syrian business community are key stakeholders in the recovery process as they possess a wealth of knowledge on existing industries. They will also be crucial partners in any efforts to “build back greener” promoting more environmentally sustainable solutions after the conflict has ended.

A rich set of tools and procedures for environmental assessment and recovery already exist, though these approaches are all too often fragmented or not coordinated. Establishing a structured set of tools, clear responsibilities, financial resources and a coordinating system could help to minimise civilian harm from environmental risks, provide a fast and efficient response mechanism for environmental damage and ensuring that the environment is fully integrated into recovery plans.

These observations consider practical solutions and opportunities for minimising the environmental and civilian health risks from conflict and should be applied to the Syrian conflict. Upcoming events such as the World Humanitarian Summit (WHS) and the UN Environmental Assembly could provide useful platforms to connect and promote these ideas. UN Secretary General Ban Ki-moon has already highlighted that the WHS is a unique opportunity to deal with the challenges in humanitarian response. As noted by UNEP on the International Day for Preventing the Exploitation of the Environment by War and Armed Conflict on the 6th of November 2015:

“In situations of war and armed conflict, the environment and natural resources can be used as weapons of war, suffer as collateral damage, or act as livelihood lifelines for affected populations. Direct and indirect environmental impacts can be as diverse as air pollution, deforestation, a lack of waste management, degradation of protected areas and biodiversity, and a collapse of environmental governance structures.

“The effects from damage done to the environment and natural resources during times of war and armed conflict continue far beyond the period of conflict itself. Such effects are passed on to future generations and may extend beyond the borders of the country impacted. Armed conflict has the potential to reverse years of development and destroy livelihoods.”

Let us imprint these words when planning for Syria’s future, and for other conflicts where the destruction of the environment and its resources threatens recovery. Wherever possible, we must aim to tackle the disastrous effects of conflict in order to minimise civilian and environmental harm.

Wim Zwijnenburg is the project leader for humanitarian disarmament at PAX, a Dutch peace organization and works on conflict and environment related issues in the Middle East. @wammezz @Paxforpeace