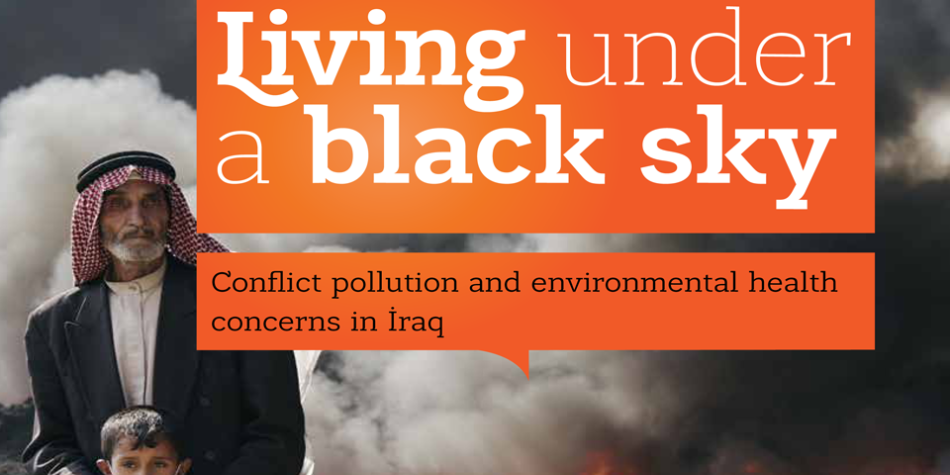 A new PAX report, ‘Living under a black sky’, reveals how the conflict in Iraq has left a toxic trail of destruction,which could have severe health consequences for communities and reconstruction efforts.

Months of burning oil wells resulted in a blackened landscape, while in other places large oil spills polluted agricultural lands and rivers. The report also identified a sharp increase of hazardous artisanal oil refining, with more than 1600 small refineries at 20 locations in northern Iraq.

Part of the research included a survey among Iraqi civilians living in Qayyarah, an oil town near Mosul where oil wells were deliberately set on fire by retreating Daesh fighters. Some of the wells burned for more than eight months.

Local people expressed severe concerns over their health and well-being, after living under the noxious clouds that affected their living environment, soil, water sources and livestock. They called for rapid remediation efforts to clean-up the oil pollution and support for health monitoring.

“Our findings demonstrate the need to provide sustained support to communities affected by toxic remnants of war, and take these concerns seriously,” said Wim Zwijnenburg, Project Leader at PAX and author of the report. “Environmental health risks tend to be underestimated and overlooked in humanitarian work and reconstruction, yet have the potential to create acute and chronic health risks to civilians.”

For the last three years, PAX has monitored the ongoing fighting in Iraq using open-source methods, and local partners in Iraq, UN institutions and humanitarian organisations, to collect data on potential environmental hotspots.

The findings of the report demonstrate the wide-ranging toxic consequences of conflict for the environment and health of civilians, which also hinder reconstruction efforts. Widespread damage to urban areas, including Mosul, generated millions of tons of rubble often mixed with hazardous materials, while targeted critical infrastructure such as powerplants and sewage systems can have detrimental environmental health risks.

Attacks by the Islamic State on oil facilities around Kirkuk and Baiji also resulted in many oil spills in the Tigris river, and flowed over large swathes of agricultural lands. Local farmers expressed concerns over the environmental disaster that affected their livelihood.

PAX calls for increased data collection, sharing and monitoring to improve humanitarian response towards these toxic remnants of war. States and relevant international organisations should support affected states and communities with financial support and expertise to mitigate and minimize environmental health risks.

“The environment is often the silent victim in any conflict, but we know that long-term recovery and peacebuilding is also dependent on taking clear action on repairing environmental damage,” said Erik Solheim, head of UN Environment. “The environment needs to be put front and centre of reconstruction efforts.”

The report is released at the UN Environment Assembly in Nairobi, where states are discussion a new resolution on conflict pollution prevention in areas affected by armed conflict. A strong resolution can support the call from affected States to the international community to provide the necessary assistance and expertise for dealing with conflict pollution. PAX, as part of the Toxic Remnants of War Network, will contribute to the discussions at the assembly.

“The conflict in Iraq, and other regional conflicts, have shown that serious conflict pollution can be caused by non-state actors, as well as by states,” said Doug Weir, Coordinator of the Toxic Remnants of War Network, who is present at the assembly negotiations. “The UN Environment Assembly should be an opportunity for the international community to bring forward clear commitments to address the toxic remnants of war, and encourage UN Environment enhance its work in this area.”