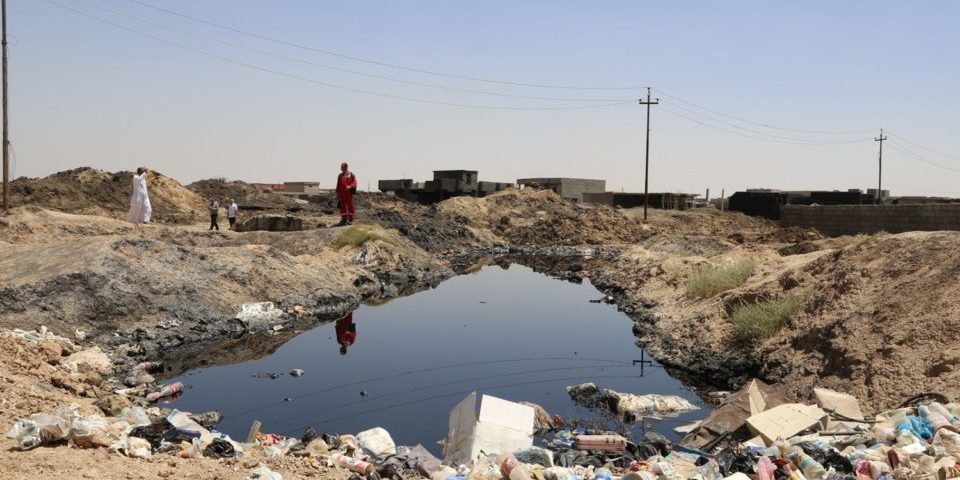 The conflict against the so-called Islamic State in Iraq is creating new pollution threats.

While Iraq is still recovering from the environmental impact of both Gulf wars, it now faces new environmental problems caused by the current conflict against the Islamic State. Since the uprising began in June 2014, fierce battles have taken place in and around cities and industrial areas, affecting the already precarious environmental situation. Wim Zwijnenburg considers the risks and response.

Heavy fighting in and around the Baiji oil refinery, and attacks on other industrial installation have led to the release of a range of hazardous substances into the environment, affecting soil and groundwater. Other battles have taken place near Kirkuk’s oil fields and it is likely IS will continue to focus their attacks on oil and gas installations, thereby increasing the likelihood of chemical incidents and subsequent environmental contamination and civilian exposure to hazardous substances.

Having learned lessons from the legacy of previous conflicts, Iraq’s Ministry of the Environment (MoE) is already developing an assessment strategy to monitor the impact of the conflict, in order to speed up remediation work to limit air, soil and water pollution. According to the Minister of Environment Qutaiba al-Jubury:

“…the ministry will work to fight pollution by adopting techniques for monitoring, control, sensing and the application of effective preventive processes and procedures, … [aiming to] combat pollutants that threaten the environment and public health in addition to those related to landmines and explosives planted by terrorists in residential neighbourhoods, homes and roads to impede the progress of security forces.”

Al-Jubury has accused IS of polluting water sources with oil waste and toxic chemicals, and destroying agricultural land, leading to desertification, economic losses and threatening food security. It appears that IS has adopted a strategy of using environmental damage as a weapon of war through the “deliberate contamination of rivers, lakes and streams with toxic waste and oil contaminants”. 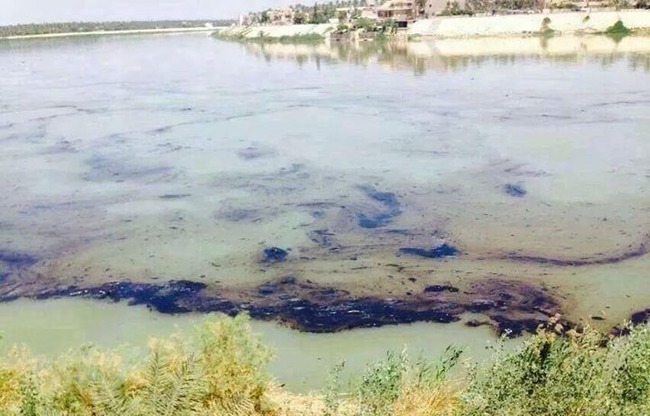 An oil slick in the Tigris River caused by an act of sabotage to one of Iraq’s oil pipelines. Credit: Iraqi Ministry of Environment.

To address this problem, local news agencies have reported that the MoE will begin an environmental assessment of affected areas. According to Luay al-Mukhtar, director of the ministry’s department for the regulation of chemicals and polluted sites, this in order to:

“…prevent the spread of disease and to safely dispose of waste. As part of this project, ministry teams will perform laboratory checks and analysis of water, soil and air in every area that has been cleared and secured of [IS] control.”

Iraq’s proposed programme outlines the importance of recording and assessing environmental damage during conflict. Its focus is on assessing pollution risks, in order to:

“…provide quick treatment and the right measures to contain the effect of conflicts or disasters on the environment in general,” said Mr. Al-Mukthar and to “curb the threat to human health posed by epidemics, diseases and deadly pollutants. Such activity and technical operations require continuous efforts on the ground for a sufficient period of time in order to draw conclusions and compile valid reports”.

Effective assessment and monitoring requires technical capacity, expertise and funding, as well as the security necessary for work to be undertaken. These factors are not always present in conflict settings, which can delay the identification, assessment and clean-up of a range of hazardous substances.

In cooperation with Iraq’s Ministry of Science and Technology, the MoE has previously established programmes to undertake environmental assessments on former military facilities from the Saddam era. Planned in cooperation with international organisations, they are intended to:

“…check, monitor and destroy any residue or waste found at those sites” and, according to a MoE spokesperson, they are ready to further “analyse the environmental impact of violence”. The aim of the programme is to: “…protect residents from any pollutants that could put their health and the health of their children at risk.”

In addition to ongoing public health concerns over damage to Iraq’s national physical infrastructure and vital environmental services such as water supply and the sewerage system. The World Health Organisation (WHO) has also highlighted technological and chemical hazards related to the conflict. They argued that the conflict would increase the risks of releases from industry, particularly the oil industry, with consequences for public health. They were especially concerned over the security of former chemical weapons complexes such as that at Muthanna near Baghdad.

With little information coming out of areas of Iraq under IS control, the risks to civilians from pollution generated by the conflict is currently unclear. Security concerns and a range of other humanitarian and financial priorities are limiting research and attention. Research by the Iraqi MoE could be a useful first attempt of hazard identification, exposure assessment and risk characterization, leading to identification of priority intervention areas, ideally with international support by relevant expert organisations.

A history of health hazards

Three decades of conflict have led to widespread damage to Iraq’s environment, its people and its government’s capacity to monitor and address problems. Following the 2003 invasion, the United Nations Environment Program (UNEP) published desk-studies and post-conflict environmental assessments on the impact of war on Iraq’s environment.

The reports identified long-term environmental and health risks caused by attacks on industrial infrastructure and their subsequent looting, contaminated military scrap metal and the collapse of governmental oversight of sensitive materials and waste management. UNEP urged Iraq and the international community to deal with these hazards swiftly but efforts were undermined by the lack of a functioning government, and with it sufficient capacity, expertise and the resources to identify, assess, clean-up and monitor problematic sites.

A needs assessment undertaken by the United Nations Development Programme (UNDP) in 2013 around Basrah, Baghdad and Kurdistan highlighted concern over the impact of war on civilians’ living and working environments. A workshop that followed its publication, and which brought together representatives from civil society, academia, the private and public sectors, identified the need for stronger environmental regulation. It also called for the remediation of polluted sites and mines so that they could be re-used, and support for clean-up and awareness-raising on environmental problems.

The plan addressed issues such as population growth, desertification, urbanisation, environmental awareness and the impact of Iraq’s conflicts on its environment. With regard to the latter, the plan recognised the problems associated with the management of hazardous conflict waste, seeking to: ‘develop solid and hazardous waste management and assess the pollution of former military manufacturing sites and conflict zones’.

NESAPI is ambitious. Based on its strategic objectives it will require vast amounts of funding, capacity and expertise to undertake all the assessments, clean-up, storage and monitoring of both the environment and affected populations in contaminated areas.

In January 2014, the Iraqi government, with the support of UNEP and UNDP, published their annual ‘The State of Environment and Outlook Report’. It was promoted as a landmark agreement between UNEP and the Iraqi government that ‘aims to speed up recovery and support peace building’. The report noted the impact of war on health and the environment, stating that ‘Years of conflict and violence resulted in chemical pollution and unexploded ordnances, which is affecting the safety and lives of an estimated 1.6 million Iraqis’.

Although that number mainly refers to the victims of unexploded ordinance (UXOs), landmines and cluster munitions, there are serious concerns over the long-term impact of environmental pollution on the health of Iraqi civilians, from access to clean drinking water, the collapse of waste management, and exposure to a range of chemical pollutants.

The renewed fighting in northern and western Iraq will likely see the further breakdown of an already fragile environmental situation, with direct impacts on public and environmental health. Insecurity and a range of competing political and humanitarian issues will hamper the planned identification, analysis, clean-up and monitoring of hazardous sites.

The situation in Iraq is another example of why the impact of conflict on the environment requires greater attention from the international community. At present, UN agencies can only act if formally requested to by the affected state or mandated to by the UN Security Council, causing delays that can lead to greater impacts on civilian health and increase the complexity of environmental damage.

In addition to efforts to minimise environmental damage in conflict, resolving its legacy requires greater visibility of incidents and a comprehensive approach to assessment from a more diverse range of actors, such as the military, the demining community, international expert organisations such as the WHO and UNEP as well as humanitarian organisations operating in the field.

A substantial body of information and expertise on environmental pollution resulting from industrial incidents or natural disasters already exists, which could help inform risk assessment and response. Ensuring that there is sufficient oversight and capacity available to respond swiftly, both during and after conflict, to reduce the risks to civilians from environmental damage is another matter. For this reason, lessons learned from Iraq and other current conflicts should help inform the development of a new mechanism for dealing with toxic remnants of war.

Wim Zwijnenburg is a policy officer with PAX, this blog originally appeared on Insight on Conflict.