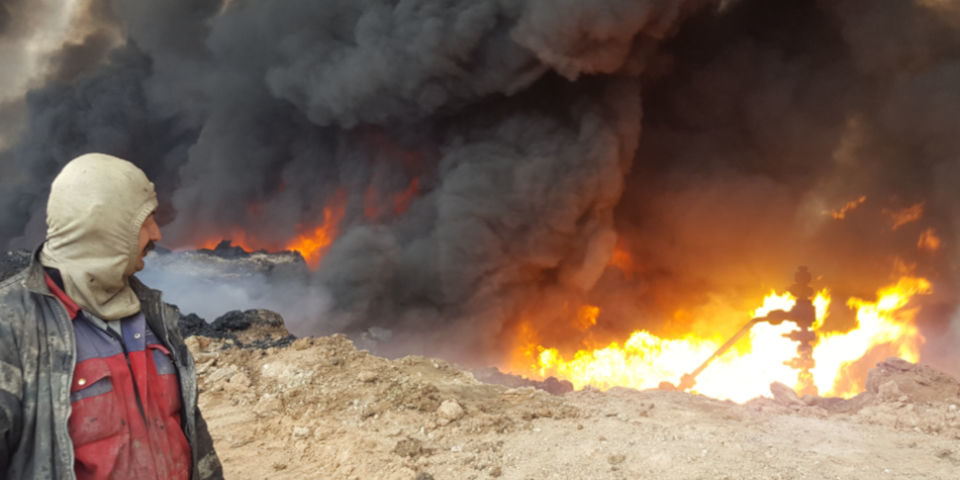 Ensuring that environmental health risks are addressed in post-IS Iraq must be a priority.

As the dust settles from the battle to recapture Mosul, and the urgent humanitarian crisis reaches its peak with millions of Internally Displaced Persons (IDPs) in desperate need of medical help, shelter food and water, Iraq is beginning to reflect on the extent of the damage inflicted by the battle against the so-called Islamic State (IS). Beyond the immediate needs of IDPs, it is becoming clear that recovery and reconstruction will be a huge challenge, requiring billions of dollars to rebuild the country. One element that will need to be addressed writes Wim Zwijnenburg, but which is rarely prioritised in the reconstruction agenda, is the impact of conflict on the environment and its consequent health risks.

The consequences of the conflict with Islamic State

Three years of fighting have left major towns and cities including Mosul, Tikrit, Ramadi and Fallujah in ruins. The severe destruction to residential, commercial and industrial areas in the cities is likely to have created environmental hotspots from the release of hazardous industrial chemicals and the build-up of rubble and domestic wastes. Meanwhile, IS has used scorched-earth tactics, polluting rivers with chemicals, and setting fire to 19 oil wells around Qayyarah, as well as to the Mishraq Sulphur factory. Understanding the health risks that have resulted from these serious pollution incidents will require specific expertise and analysis, if we’re to understand the threat they pose to Iraqi civilians and the environment they depend on.

To discuss these concerns, the Iraqi Environment and Health Committee in the UK (IEHC-UK) organised a conference on July 8 at University College London, attended by Iraqi engineers, medical health professional, environmental experts, PhD students and civil society organisations. The event was sponsored by RSK Group PLC and attendees considered Iraq’s pre-existing pollution problems and the consequences of the latest conflict with IS. In doing so they hoped to provide a starting point for engagement with the international community and the Iraqi government, and to encourage the inclusion of environmental health concerns in the assessment of the conflict and in post-conflict reconstruction.

President of the IEHC-UK Dr Jehan Baban, opened the conference by highlighting the environmental damage caused by Daesh (IS):

“This criminal organisation has destroyed Iraq’s environment and heritage and has left a terrible legacy of death, destruction, pollution and millions of internally displaced Iraqi citizens with a detrimental effect on economy and health.”

The sentiment was echoed by Iraq’s ambassador to the UK, who spoke on the disastrous environmental legacy wrought upon the country by past conflicts, as well as the current conflict against IS. The ambassador expressed the need to include these problems during the rebuilding of the country in order to provide a clean and safe environment for returning refugees and those internally displaced. He also raised concerns over other pollution sources, such as those from poor industrial practices, as well as the lack of proper implementation of environmental policies.

Iraqi experts then presented on a number of  historical and contemporary pollution issues; initiatives undertaken by oil companies operating in southern Iraq to tackle industrial pollution; and the current challenges in meeting Iraq’s National Strategy on Environment and Health. Taken together, they presented a mosaic of issues that would benefit from a comprehensive nationwide approach towards environmental pollution.

PAX and the Toxic Remnants of War (TRW) Project also presented their research and policy findings at the conference. Wim Zwijnenburg discussed the findings from PAX’s work monitoring the conflict’s environmental impact, which addressed remotely monitoring damage to industrial sites, oil fields and oil infrastructure, makeshift oil refineries and urban areas, and how this type of remote assessment using open-source information can provide a starting point for post-conflict field assessments. He also shared their findings from fieldwork undertaken by PAX, which had demonstrated that greater cooperation between UN agencies and humanitarian organisations could improve responses to environmental health risks from conflicts.

Doug Weir from the TRW Project sought to place the latest environmental damage in Iraq into historical context by considering how it might influence the renewed international debate over strengthening the protection of the environment in relation to armed conflicts. Environmental damage caused by the 1991 Gulf War had triggered significant global interest in conflict and the environment, while the 2003 Iraq War was the first time where the environment significantly featured in a UN-led response to a conflict. The oil fires started by ISIS came shortly after an historic resolution was passed by the UN Environment Assembly on conflict and the environment, and pollution fears in Iraq look set to inform a new resolution at December 2017’s meeting of the body.

Pollution: a huge problem in Iraq

The ensuing discussion between participants and the audience provided useful insights on how to tackle new and historical civil and conflict pollution issues in Iraq. Beyond the major reconstruction challenges, there are other underlying structural issues that must also be addressed, most notably the lack of strong governance able to implement much needed environmental policies and the oversight of heavy industrial and oil industry sites. Weak governance has sustained a range of polluting practices, such as the dumping of chemical waste, and has increased air pollution. Other experts mentioned the festering corruption issues within the government that hinder progress in battling pollution. This was a problem both before the current conflict and risks increasing during the reconstruction phase, as billions of dollars flow into the country to support rebuilding its industry and urban areas.

For PAX and the TRW Project, it became clear from the discussion that a coordinated effort by all relevant actors in Iraq is needed to address the complexity of the environmental issues it faces. Various UN agencies and humanitarian organisations work separately on single issues, such as the damage assessment of urban areas, waste collection problems, monitoring of oil fires and documenting the health concerns raised by those living in affected areas. Often, individuals in these organisations have little knowledge of the work being done by others, and responses would benefit greatly from improved information sharing. However, one positive example has been UN OCHA and UNEP’s placement of a field officer in Iraq focusing on environmental health risks, and UN-Habitat, whose work on the Mosul online portal has included the publication of initial data on potential environmental health risks in the city.

As recovery and reconstruction begin, lessons should be learned from Iraq’s past dealings with toxic remnants of war. One of these lessons is the importance of including the views of affected communities when prioritising assessment and remediation projects, and the need to improve awareness-raising and risk-education in affected areas. Processes that aren’t inclusive, and where information on risks is not made available to communities, can generate unnecessary anxiety over perceived risks, concerns that can fuel local grievances towards the authorities, which can be exploited by political groups. The rights of communities to information on environmental risks that can impact their human rights and livelihoods must be respected, as must their right to participate fully in decision-making that affects those rights.

Governments funding reconstruction efforts should ensure that funding is available for relevant expert organisations such as UN Environment, to ensure that environmental and sustainability policies and targets are fully mainstreamed in recovery and reconstruction projects. This will require a monitoring and accountability mechanism that covers relevant Iraqi government bodies, international organisations, NGOs and the private sector. Ensuring that the environmental rights of affected communities are respected and protected, and that post-conflict reconstruction is sustainable and avoids further harm to the environment are core principles with universal application.

The Iraqi Environment and Health Committee in the UK’s 2017 conference statement is available here.