Rebuilding Gaza and the need to assess TRW risks 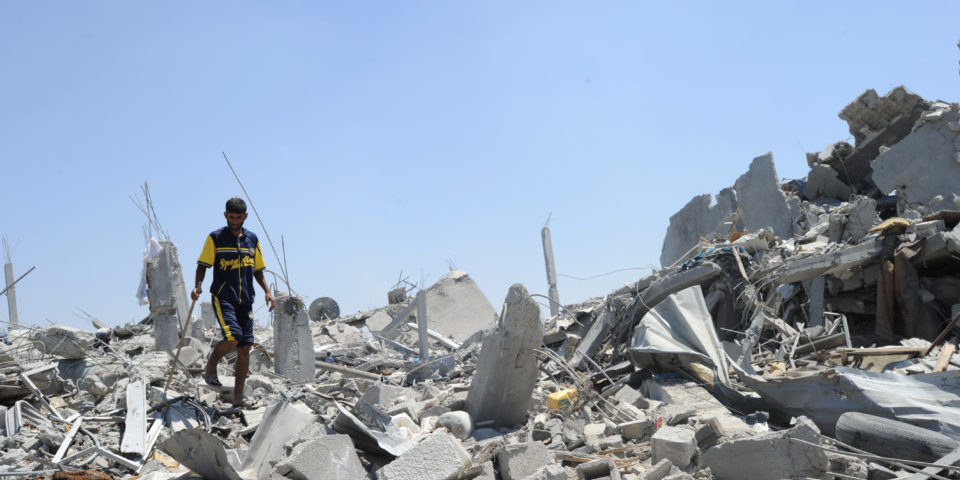 The recent conflict in Gaza may well have had serious repercussions for its environment, and with it people’s health.

The people of Gaza are facing the colossal task of rebuilding homes, roads and schools following the hostilities between Hamas and the Israeli Defence Forces (IDF) last summer. Disagreements over border access and the importation of construction equipment and materials have delayed the removal of rubble and rebuilding. As a result, environmental risks to civilian health linger in Gaza despite calls for greater urgency and co-operation between The Palestinian Authority, Israel and the United Nations.

The IDF’s Operation Protective Edge resulted in the destruction of 61,800 homes along with the death of 2,145 Palestinian civilians by aerial, naval and ground bombardment between the 8th July and 26th August 2014.1

An international response to the hostilities saw donor nations assemble at the Cairo Conference on the 12thOctober 2014. A total of US$5.4bn was pledged, with half of the amount allocated to, as Norwegian Foreign Minister Borge Brende termed it, “rebuilding Gaza…distributed in response to the daily needs of the Palestinian people”. The total cost of rebuilding has been estimated at US$7.8bn by the Palestinian Authority.

The targeting of Gaza’s densely packed neighbourhoods left partially destroyed housing and tonnes of rubble, debris and Pulverised Building Materials (PBMs). One Jerusalem-based environmental group estimated that 4m tonnes of rubble were generated by the hostilities. The Palestinian Minister of Public Works, Mufeed al-Hasayneh, estimated the amount at 2.5m tons. By December 2014, clearance efforts in Gaza City’s Shijahiyah neighbourhood were under way, with hopes of removing 140,000 tonnes by the start of 2015.

Due to the cramped and overcrowded conditions in the aid shelters that were established to cater for the 100,000 people displaced by the fighting, many residents have decided to remain in the ruins of their homes, living among the building rubble. This leaves them at greater risk of inhalational exposure to PBMs and the heavy metal impurities found in concrete, such as cadmium and selenium. Particulate matter has been linked to respiratory disease, and a recent study has shown elevated levels of selenium in premature babies with birth defects born to mothers who were exposed during pregnancy in the Israeli bombardment in 2008.2 A UNEP post-conflict environmental assessment in 2009 discovered asbestos at bombed sites following Israel’s Operation Cast Lead and it is likely that the carcinogenic substance remains a threat while debris is left un-cleared.3 The same post-conflict assessment also discovered PCBs (Polycyclic Biphenyls), PAHs (Polynuclear Aromatic Hydrocarbons), dioxins and furans at a number of sites. Exposure to these groups of hazardous substances poses a risk to civilian health. 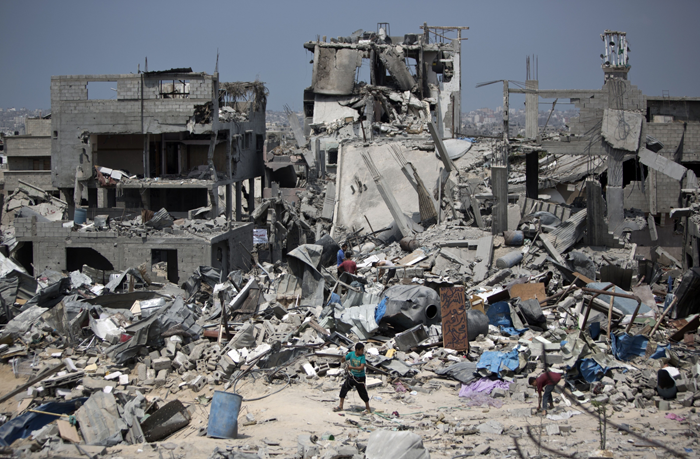 Exposure to contaminants in conflict debris poses a risk to human and environmental health.

Under UN and Palestinian Authority monitoring, Israel said it would allow in 600 tonnes of cement, 50 truckloads of gravel and ten truckloads of steel for rebuilding homes and public buildings. Oxfam has reported that only 287 trucks of building materials have actually entered Gaza, and the mechanism governing how the 20,000 eligible households are assigned building materials has led to a black market that is slowing the rebuilding process. UXOs lying among the rubble at sites across Gaza are also hindering rebuilding efforts. UNRWA has warned of the risks they pose to civilians, particularly those that have elected to remain in their homes.

In its 2009 Gaza post-conflict assessment, UNEP argued that the use of explosive weapons to destroy a building can contaminate building debris and that rubble “must be handled as hazardous waste”.4

Explosive residues can persist in targeted areas after the intended explosion or leach from ERW. Common energetic compounds such as RDX, HMX and TNT as well as their breakdown products can all pose a threat to human health.5 Given the intensity of the recent bombardment in Gaza, the extent of fresh contamination from explosive residues is likely to be significant. Hazem Abu Murad the head of Gaza’s EOD team estimated that 18-20,000 tonnes of explosive munitions were fired upon Gaza during the hostilities. However the true extent of contamination is likely to remain unclear due to the delays in post-conflict environmental assessment in targeted urban areas and the lack of transparency from the IDF over the number and type of munitions used.

Need for environmental and health monitoring

The risk to health from contamination resulting from the targeting of urban areas is long-lasting and incorporates a wide range of harmful substances that require proper monitoring, handling and removal. Exposure risks are exacerbated if rubble remains un-cleared for prolonged periods. Yet despite the huge amounts of money being donated following the conflict, there continues to be a serious delay in bringing new building materials into Gaza and in removing debris.

Previous environmental problems and accessibility constraints imposed by the Israeli blockade of the Gaza Strip have been exacerbated by the recent hostilities.6 Monther Shublak, Director of the Coastal Municipalities Water Utility in Gaza has raised environmental problems arising from the targeting of water treatment facilities and the risks to staff trying to maintain the water supply to populated areas during the airstrikes. There is a risk that TRW contamination from ERWs and their energetic residues, PBMs and heavy metals may leach into ground and surface waters, such risks highlight the need for environmental monitoring post conflict as part of a wider discussion about water security and accessibility within the Gaza Strip.

The funds allocated for Gaza’s rebuilding do not cover money for environmental and health monitoring, the TRWP believes the range of potential pollutants stemming from the recent bombardment and the population density of the strip support the need for programmes to be put in place. This would enable the identification of at risk groups and contaminated areas, allowing clean-up to be prioritised. It is understood that UNEP is planning a fresh assessment following the recent conflict, though this will be a snapshot of conditions at the time of assessment and will look at a broad range of environmental hazards.

The intensive use of weapons in populated areas has previously been linked to heavy metal contamination and health impacts on mothers and their offspring, as well as residents in areas of intense fighting. 7,8While shelter and the removal of UXO are being prioritised, governments and development agencies should take greater account of environmental hazards with the potential to impact civilian health over the long-term.

This blog is dedicated to the memory of Hazem Abu Murad and his colleagues who were killed when attempting to disable a 500kg unexploded Israeli missile in the summer of 2014.

Andy Garrity is a Researcher with the Toxic Remnants of War Project.