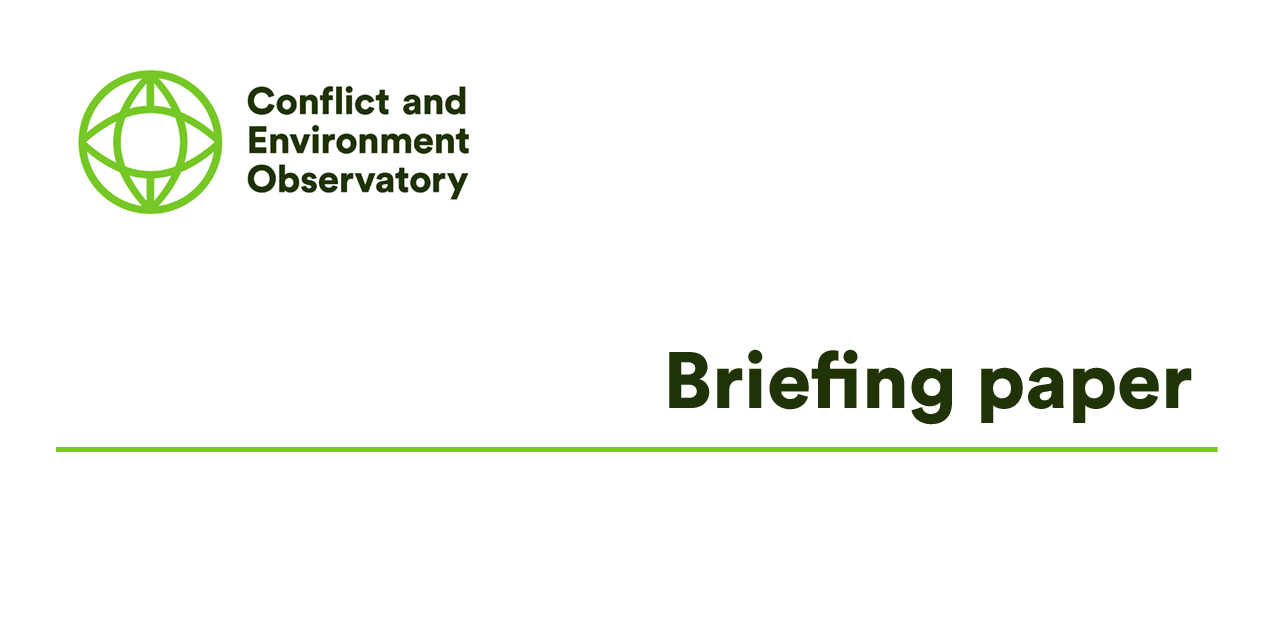 Briefing: Recommendations for the implementation of UNEP/EA.3/Res.1

UNEP/EA.3/Res.1 is the most significant UN resolution on conflict pollution to date, while resolutions in the UN General Assembly have addressed conflict specific incidents on occasion, the UNEA-3 resolution is the most coherent text agreed thus far. While it did not capture all the factors responsible for generating conflict pollution, the scope of the preamble effectively framed many of the issues relevant to the topic. Meanwhile the operative parts provide a useful direction for international progress towards addressing conflict pollution.

The objectives of the resolution, to minimise conflict pollution and the health and environmental risks that it poses, were also reflected in the UNEA-3 Ministerial Outcome Document:

5. We are concerned by the legacy of environmental damage and pollution caused by armed conflict and terrorism, often delaying recovery, undermining the achievement of sustainable development and threatening the health of people and ecosystems.1

While the resolution made a number of proposals concerning how UN Environment could improve its work on the issue, the operative parts of the text that relate to State obligations were often worded in more general terms. In light of this, this paper provides some specific actions that States can take to encourage the effective implementation of the resolution and in so doing help contribute towards the common goal of a Pollution-Free Planet. It is also vital that measures to implement the text are included in the proposed Implementation Plan under development by UN Environment.

OP.2 Emphasizes the need to raise greater international awareness of environmental damage and pollution resulting from armed conflict or terrorism;

We encourage States to:

1. Raise the issue of conflict pollution in relevant UN and international fora, such as: the UN General Assembly (in particular Sixth Committee debates on the ongoing study of the International Law Commission on the protection of the environment in relation to armed conflicts); donor conferences for conflict-affected States; and meetings under relevant Multilateral Environmental Agreements. States should also raise the issue in national statements on November 6th, the International Day for Preventing the Exploitation of the Environment in War and Armed Conflict.

2. Cooperate with civil society to improve the collection and dissemination of data on pollution linked to armed conflicts and terrorism. For states affected by conflict pollution, this should include taking steps to increase transparency and sharing for environmental data held by national authorities.

1. To continue and increase its coverage of conflict pollution issues in its outreach work on Disasters and Conflicts.

2. To conduct a review into the findings and outcomes of its Post-conflict Environment Assessments which have dealt with conflict pollution, in order to identify best practices; the findings of the study should then form the basis of a set of guidelines to assist with national capacity building and awareness-raising.

OP.3 Urges member States to take appropriate measures to minimize and control pollution in situations of armed conflict or terrorism;

OP.4 Stresses the importance of preventing the pollution of rivers and water reserves with harmful substances as a result of armed conflict or terrorism;

To review their military practices and guidelines to identify measures that can be taken before and during conflicts to reduce the generation, and minimise the harm, from conflict pollution.

1. Before conflicts States should ensure that emissions from training and testing facilities meet civil emissions standards. Militaries should also utilise weapons reviews under Article 36 of Additional Protocol 1 to identify the potential for new weapons to cause unacceptable environmental effects, while remaining cognisant that international humanitarian law’s thresholds for unacceptable harm are poorly defined and insufficiently protective of the environment.

2. During conflicts, States should review their targeting guidelines to better reflect the health and environmental risks that the accidental or deliberate damage to environmentally sensitive sites, such as industrial, petrochemical or water, sanitation and energy infrastructure can pose. States should also critically review their military waste management programmes, as well as the wider footprint of their activities.

3. Militaries should do more to ensure the timely sharing of data on environmental hazards, collected by them for the purposes of forces health protection, with civil parties, including international organisations, national and local authorities, and civil society actors.

OP5. Invites all member States, as appropriate and upon the request of the affected State, to cooperate closely in preventing, minimizing and mitigating the negative impacts of armed conflict or terrorism on the environment;

A lack of technical expertise and capacity is common to many States affected by conflict pollution. It is also the case that the consequences of environmental harm caused by conflicts do not respect national borders.

While UN Environment can provide technical assistance on an ad hoc basis, more effective cooperation between States is also important. Improving the transfer of bilateral technical and financial resources to affected States, where requested, could help complement and reinforce the work of UN Environment.

OP.6 Urges all States affected by armed conflict or terrorism to encourage all stakeholders at the national level to participate in the preparation of national plans and strategies aimed at setting the priorities for environmental assessment and remediation projects, and to ensure that the data necessary for identifying health outcomes is collected and integrated into health registries and risk education programmes;

This operative paragraph is fundamental to understanding, addressing and minimising the health and environmental risks of conflict pollution. We therefore urge those States affected by conflict pollution, or pollution caused by terrorism, to report back to the CPR or UNEA-4 on the measures they have taken, or plan to take, to ensure a comprehensive and inclusive domestic approach to tackling its environmental and health legacy.

The objectives in OP6 are also applicable to UN Environment. They should serve to encourage more prolonged engagement in the process of assessments, engagement that seeks to ensure that the health impacts of environmental degradation are more fully addressed than at present, and that the views and needs of affected communities are fully integrated into assistance and recovery programmes. This may entail closer collaboration with WHO and national health administrations than at present, and should include the collection of gender disaggregated data on the harm caused by conflict pollution.

OP.9 Also requests the Executive Director, within available resources and in conformity with the Programme’s mandate, to explore ways of improving the Programme’s work on pollution threats arising from armed conflict or terrorism;

In addition to the measures outlined above, including the identification and dissemination of best practice, more effective links between environmental assessments and health monitoring, and the more meaningful inclusion of affected communities in decision-making, there is also scope for UN Environment to strengthen its messaging on conflict pollution.

A balance needs to be struck but to truly address the causes and consequences of conflict pollution, both it, and the communities and ecosystems it harms must be more visible than at present. UN Environment is well placed to communicate these harms and provide leadership, and should deepen its cooperation with civil society to achieve this. Wherever possible, UN Environment should expand its joint advocacy in partnership with other UN agencies, such as OCHA, WHO and UNDP.

As noted above, there are numerous opportunities for the effective implementation of UNEP/EA.3/Res.1 by States and UN Environment. However, it remains the case that in spite of the engagement on the text – and its predecessor at UNEA-2 – during negotiations, absent a clear mechanism to encourage and scrutinise implementation by relevant parties, the texts will ultimately be meaningless.

We are pleased that the role of the CPR has begun to be examined in this regard and urge Member States to accelerate discussions on this theme. Beyond the wider question of the utility of UNEA as a forum that poor implementation raises, it seems self-evident that future stakeholder engagement is contingent on the Assembly being, and being seen to be, a body that affects change for the benefit of people and planet.

3. Stakeholder recommendation regarding the theme of the 2019 Environment Assembly

We were disappointed that the proposal that environmental security be considered as a potential theme was rejected. Nevertheless, of the two themes currently under consideration we support sustainable consumption and production on the basis of its numerous entry points for environmental security themes. As environmental security does not currently have a designated home within the UN system, UNEA could be a valuable body for examining, articulating and inspiring progress on this important topic.