Tufts | Strategies of the Coalition in the Yemen War: Aerial bombardment and food war 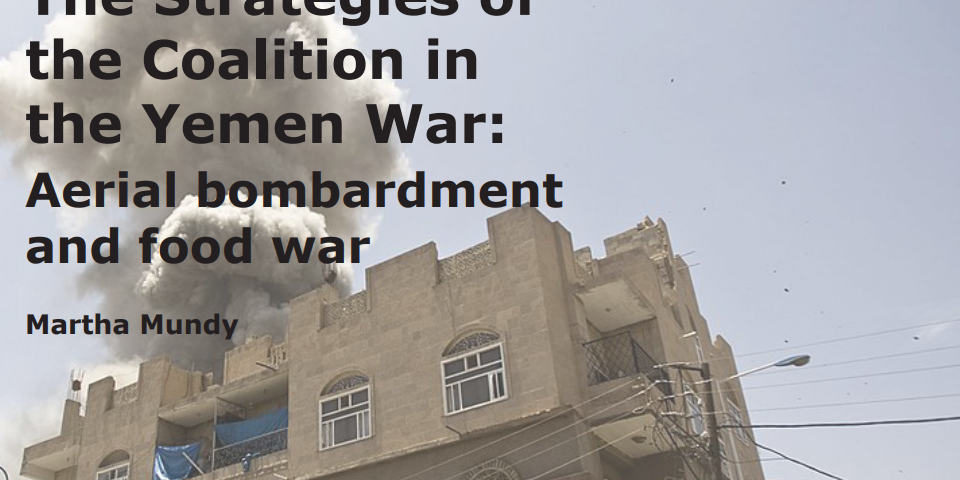 The coalition bombing campaign has had a major impact on food production and distribution in rural Yemen and on fishing along the Red Sea coast.

The Strategies of the Coalition in the Yemen War,” provides comprehensive analysis of patterns of targeting civilian, agricultural and fishing sites by the Saudi Arabia-led coalition in the ongoing Yemen war. The Coalition is backing the internationally recognised government of Abd-Rabbuh Mansour Hadi, in the war against the “Houthi rebels” – the “Salvation/Rescue Government” of Ansarallah and its allies based in Sana’a. The war has brought Yemen to the brink of famine, with an estimated 22 million people in need of food aid.

The report presents data collected by several organizations within Yemen: the civil society organization, the Yemen Data Project, Ministry of Agriculture and Irrigation (MAI), and the Ministry of Fish Wealth (MFW). Together, the data detail the overall levels of targeting civilian, military and unknown sites (2015 – 2018); the systematic targeting of agricultural areas including the character of the site, and the frequency and timeline of targeting (2015 – 2016). The Report also documents the killing of fishermen along the Yemeni Red Sea coast, destruction of boats and infrastructure required to support small-scale fishing (2015 – 2017) that otherwise could provide life-saving food for a civilian population on the brink of famine.

This is a very confusing and confused take. The #NordstreamLeaks are not about damaging a neighbour's environment. The environmental impact on the Baltic Sea environment will be far, far outweighed by the climatic impact on our common atmosphere.

Damaging a neighbor’s environment can be easy, cheap, and deniable.

Thread with various estimates for the climatic impact of methane releases from the Nord Stream pipelines. Just as basics, this is much worse than the CO2 emissions had the methane been used and burned, and this is a big release by pipeline fault standards. #Ukraine

Today's sabotage of the Nord Stream 1 and 2 pipelines resulted in a substantial release of methane to the atmosphere. Initial estimates suggest ~115,000 tons CH4 from Nord Stream 2, amounting to ~3.2 million tons CO2-eq (GWP100). Possibly double this when accounting for NS1.

If you're completely new to the #PERAC legal framework, and just need the basics, we also have an introductory FAQ: #IntLaw 3/3

In 2022 states will adopt a new legal framework protecting the environment from war, our PERAC principles FAQ explains what you need to know.