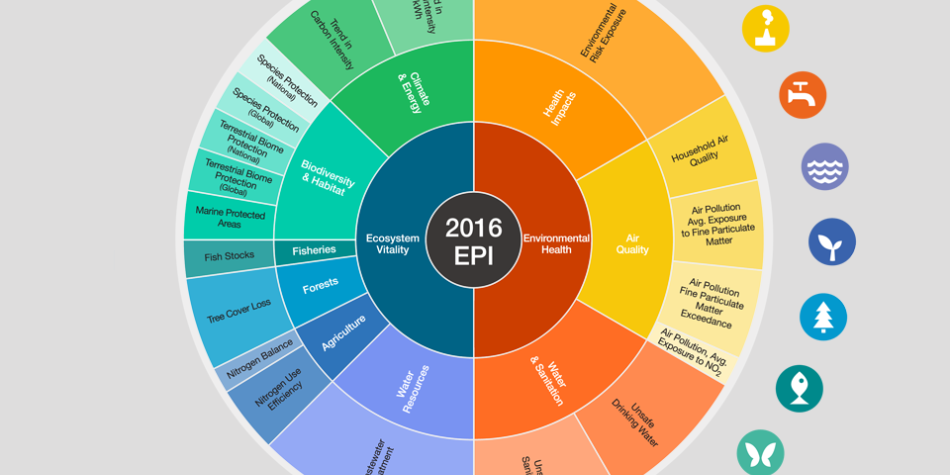 It’s no great shock but the data is in and it suggests that conflict-affected countries fare worst across many environmental indicators.

Improvements in global environmental monitoring are continuing to provide evidence showing that conflicts and insecurity have a persistent and negative impact on environmental governance. With governments now committed to the SDGs, these findings are reinforcing the urgency of addressing the environmental dimensions of armed conflict.

Since 2006, Yale University’s Environmental Performance Index (EPI) has been ranking the performance of national environmental policies using an increasingly detailed range of indicators. The index is split into environmental factors relating to human health, and those relating to what Yale calls ecosystem vitality. The former relate to factors such as access to clean drinking water or exposure to air pollution, while the latter considers issues like biodiversity, forest cover and the sustainable management of fisheries.

Their latest biennial report finds that, while some indicators are improving globally, others are worsening, and seriously so. Globally we are doing better on access to water and sanitation. There has been an expansion of marine protected areas, but there are worrying trends on wastewater treatment, carbon intensity and air pollution from PM25. Some of the trends can seem contrary or counterintuitive. For example, more people have access to piped water but that water may not have been adequately treated to remove harmful substances. We are protecting more marine areas than ever but the management of many fisheries is inadequate to protect stocks.

As with 2014’s report before it, 2016’s study finds that the vast majority of the countries performing worst on environmental policies are those that are suffering, or recovering from armed conflicts. Many of these are the least developed States but some with a higher ranking prior to the onset of conflicts, such as Libya and Iraq, are also performing poorly relative to their regional peers. The worst performing States, which include Somalia, Afghanistan, Chad, Sudan and the DRC, also score poorly on international rankings for peace and stability, such as the Global Peace Index and Fragile State Index.

Between 1991 and 2012, Somalia was without a federal government as a result of persistent conflicts and instability. In this respect its consistently poor performance on environmental policies is unsurprising. The 2016 EPI does note some improvements in water treatment and environmental health risks during the last 10 years. Environmental health risks are classified by the EPI as unsafe water, unsafe sanitation, ambient particulate matter pollution, household air pollution from solid fuels and ambient ozone pollution. However these are offset by further degradation of its fisheries, which are illegally exploited by the fishing fleets of other nations in the absence of governmental control, as well as ongoing losses to its terrestrial biodiversity and habitats.

As with Somalia, Afghanistan has made some progress during the last decade, in spite of its 30 year conflict. Nationally, access to drinking water and sanitation has improved, as has indoor air quality. But it too performs poorly on biodiversity and habitat markers. The DRC has also seen 10 year improvements in reducing some environmental health risks. Nevertheless, where it has occurred, progress on many environmental indicators for all three countries – from what were low baselines – has been far slower than it should have been.

By the authors’ own admission some of the data sources that the EPI uses, which typically record changes on the national level, are too imprecise to provide accurate assessments of local changes. Generalised trends may also not reflect the temporary changes in environmental quality associated with some armed conflicts and which can influence human or environmental health. Some of these changes may be unexpected or unpredictable, such as the decline of nitrogen dioxide levels across the Middle East as a result of the Syria crisis, or the localised changes in air pollution associated with electricity production that were observed in Ukraine in 2014. Nevertheless, trends are important for judging performance, and gathering data on health and environmental indicators such as these has taken on a new urgency with the global agreement last year on the Sustainable Development Goals (SDGs).

Delivering the environmental dimensions of the SDGs

Is this an oversimplification? Clearly numerous political, economic and developmental factors play an important role in the ability of States to reach the indicators used in studies of this sort. They also have a role to play in the likelihood of armed conflicts developing in the first place. But for countries like Afghanistan, Somalia and the DRC it is clear that years of armed conflict and insecurity are casting a long shadow over their environmental performance and with it the protection of human health and ecosystems.

Of politics and environmental policies

Aside from the SDGs, one of the main outcomes of the 2012 Rio+20 UN Conference on Sustainable Development was the sense that the international community must do more to protect the environment. This contributed to the decision to strengthen the role of the UN Environment Programme and with it its new universal governing body the UN Environment Assembly (UNEA). Preparations for this May’s UNEA-2 in Nairobi are well under way. As a consequence of the conflicts in Ukraine and Gaza, and the displacement of Syria’s population, three draft resolutions on the environmental dimensions of armed conflict were recently tabled. While many States have supported the inclusion of the topic, a minority have objected on the grounds that UNEA shouldn’t be “political”.

Whether this objection is just a dubious excuse for inaction or whether it represents national sensitivities over the policies and activities of particular governments isn’t always clear. But what studies like Yale’s EPI are showing is that conflict and the environment is indeed political – just not in the sense suggested by the objectors at UNEA. The Yale data demonstrate that armed conflicts appear to have both immediate and long-term effects on the environmental politics of affected countries, effects that hamper their ability to deliver the policies necessary for environmental and health protection.

If, as the Rio+20 consensus suggests, the international community must make a more concerted effort to address global and national environmental challenges, this will have to include meaningful efforts to tackle the environmental impact and legacy of armed conflicts, irrespective of the political sensitivities involved.

Doug Weir manages the Toxic Remnants of War Project @detoxconflict, part of the TRW Network, a global coalition of NGOs advocating for a greater standard of environmental and civilian protection before, during and after armed conflict.