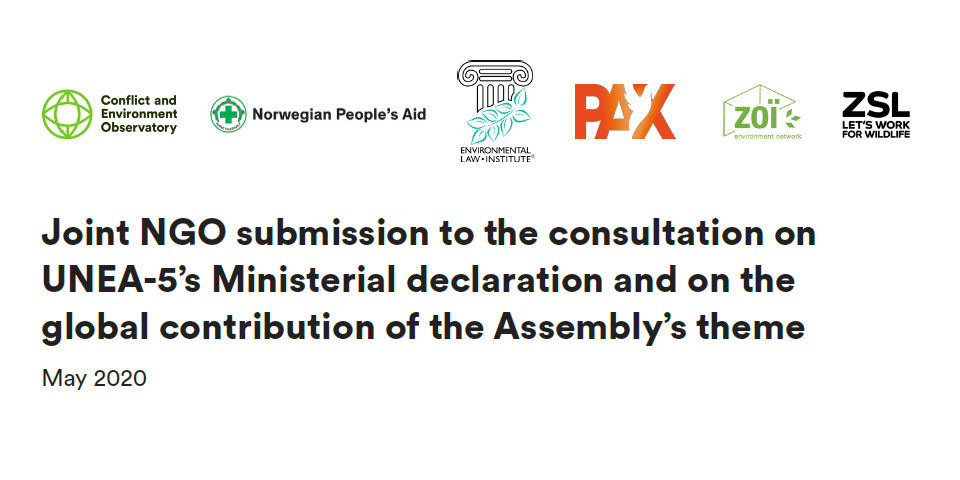 Important elements and key messages for the UNEA-5 Ministerial declaration

Armed conflicts and insecurity threaten biodiversity and ecosystem services in numerous ways, and throughout the cycle of conflicts. More than 90% of the major armed conflicts between 1950 and 2000 occurred within countries containing biodiversity hotspots, and more than 80% took place directly within hotspot areas. Prominent conservation experts are calling for a transformation in how we approach biodiversity protection in relation to conflicts.

During conflicts, pollution, human displacement and unsustainable coping strategies that lead to the over-extraction of resources can all pose a threat to nature, and to human health and livelihoods. The environmental consequences of conflicts can also undermine humanitarian response to affected populations. Meanwhile, the collapse of environmental governance can weaken systems of protection and sustainable resource use that may have been in place prior to the conflict. Resource monitoring, and conservation research and implementation can also be severely constrained during conflicts, and at a time where protected areas may be under heightened human pressure.1

Following conflicts, inadequate governance, insecurity and rapid socio-economic change can encourage the unsustainable exploitation of resources, further accelerating habitat and biodiversity loss. It is notable that peace often brings with it huge spikes in deforestation. This can increase human encroachment into tropical forests, and with it the scope for the transmission of zoonotic diseases like COVID-19. Environmental change and human pressure over natural resources can also contribute to the onset and sustainment of conflicts, while the ungoverned spaces created by conflicts facilitate wildlife crime and the illicit trade in resources that threaten species in many areas of the world.

The timely identification and monitoring of conflict-linked environmental degradation is vital to support prevention and mitigation measures that protect people and ecosystems. Meanwhile, peacebuilding interventions that focus on protecting biodiversity, the communities dependent on it, and on the sustainable and equitable management of ecosystem services, hold enormous potential for reducing conflict and for building peace. Similarly, nature-based solutions that help address the twin climate and biodiversity crises should play a prominent role in post-conflict recovery, and in helping states recovering from conflict reach the Sustainable Development Goals.

In light of this, our organisations believe that the declaration should:

For the many states affected by armed conflict and insecurity, addressing their environmental dimensions is a vital component of efforts to protect nature to achieve the Sustainable Development Goals. In turn, and thanks to UNEP’s knowledge base on Disasters and Conflicts, the Assembly has an important role to play in promoting the connection between the environment, peace and security throughout the UN system.

In highlighting and promoting actions for nature throughout the cycle of conflicts, UNEA-5 should identify and develop synergies with relevant ongoing processes elsewhere in the UN system. This could include the International Law Commission’s work on the legal framework protecting the environment in relation to armed conflicts, and that of the Montevideo Programme.2 The growing attention on the environment, peace and security at the UN Security Council, and efforts underway to highlight the linkages between biodiversity loss and armed conflicts at the upcoming World Conservation Congress. Or supporting the integration of biodiversity protection in the implementation of disarmament instruments, such as the Arms Trade Treaty and the Anti-Personnel Mine Ban Convention.3

UNEA’s universal membership, and environmental focus, means it is well placed to articulate and draw attention to the relationships between nature, conflicts and sustainable development, and to promote concrete policy measures.

States have the opportunity at UNEA-5 to adopt transformative and concrete actions for nature, across the cycle of conflicts, including:

Peace and security considerations cross-cut all four themes recently proposed by the secretariat for UNEA-5’s resolutions: Nature for Jobs and Economic Prosperity, Nature for Health, Nature for Climate and Nature for Sustainable Food Systems. Should this approach be endorsed by states, it is imperative that language addressing conflicts be integrated into each of the four omnibus resolutions. Should the proposal for omnibus resolutions be rejected, a resolution on actions for nature across the cycle of conflicts could form the basis of a standalone text.

In addition, this theme could also form the basis of one or more side events, which would allow participants from a range of backgrounds to explore the relationship between conflicts and nature in depth. Whichever approach is chosen, its focus must be on encouraging practical policy measures that protect ecosystems and decrease the vulnerability of communities living in conflict-affected areas.