Jordan grapples with the environmental consequences of its refugee crisis 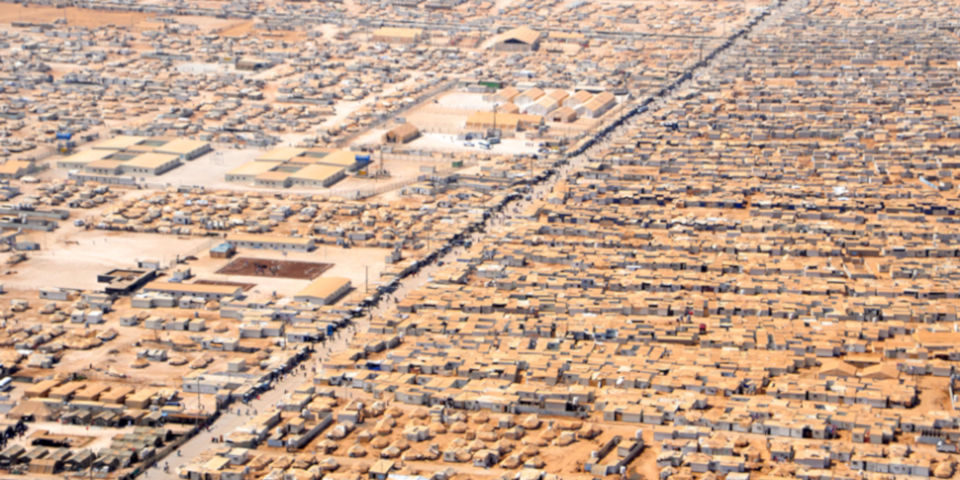 The massive flow of refugees fleeing the violence and atrocities of the Syrian conflict is creating huge political and logistical challenges for neighbouring countries.

Amidst the urgency of the humanitarian response, the environmental footprint of these population surges has been less visible but, as Jordan is discovering, failing to address the impact of migration during response and recovery could have serious health, environmental and political consequences.

A history of shelter

Prior to the conflict in Syria, Jordan’s environment was already in a precarious situation. Its scarce water resources and sensitive, in places unique arid habitats were under significant pressure from rapid population growth and poorly planned urbanisation, unsustainable agricultural practices and inadequate waste management. The twin threats of desertification and climate change were ever present but also acknowledged by a government increasingly conscious of the health and economic consequences of environmental degradation.

Jordan is of course no stranger to the hosting of refugee populations. Globally, Jordan has the second largest ratio of refugees to citizens and the fifth largest refugee population in absolute terms, with large numbers of Palestinians and Iraqis making use of its relative stability within the region. As a result, Jordan’s population has repeatedly surged in the wake of conflicts but these influxes of commonly young or wealthy middle-class refugees have often proved economically beneficial. Nevertheless Jordan’s government has had to become adept at managing the political repercussions of these sudden demographic jolts.

However these population surges also carry with them an environmental cost. For example, during the 1991 Gulf War an estimated 1.38m refugees entered Jordan. Predominantly herders, they brought with them 1.8m sheep, goats and camels. The impact of their livestock on Jordan’s fragile rangelands during the dry season was significant – desert shrubs and plants that take decades to mature were grazed down in weeks and months. Recovery for the 7.1m hectares affected would take years, with endangered species such as oryx, gazelle and caracal all affected by habitat degradation and loss. Jordan would later claim US$160m from the UN Compensation Commission established in the wake of the conflict for the restoration of its rangelands.

The environmental impact of Syrian refugees in Jordan

As of this month, the UNHCR puts the total number of Syrians fleeing the conflict in Jordan at 638,633. However this only includes those who have officially registered. The Jordanian government believes that more than 1.5m Syrians are currently living in the country – although this includes those who fled before the onset of the conflict. Of those officially registered, 81 per cent are not in camps but are instead living in urban or rural areas, predominantly in the northern and eastern parts of the country. The scale and distribution of the refugee population is creating more complex environmental impacts than those seen in 1991. Three issues that have been flagged nationally are those of land and resource degradation, deteriorating air quality and hazardous waste management. Added to these are the more localised impacts from the formal camps and informal settlements.

Growing economic pressure stemming from increased competition for resources has had a number of knock-on effects for Jordan’s environment. Illegal tree cutting is increasing as fuel prices have increased. The increasing price of fodder has led to overgrazing, threatening food security for Jordanians and refugees alike. Illegal wildlife hunting has been on the rise due to the reduced availability of meat from domesticated livestock. All three trends are being reflected by an increasing number of legal cases coming before the courts and are placing already fragile ecosystems and resources under pressure.

The rapid population growth, and the development of the industrial and service sectors this necessitates, has combined with increased vehicle traffic to increase ambient air pollution levels. Sulphur dioxide – particularly problematic due to the high sulphur content of Jordanian oil, carbon monoxide, nitrogen oxides and particulate matter all pose risks to public health, with emissions increasing proportionately in relation to population size. As many refugees arrive with a need for health services, the production of hospital and pharmaceutical waste has also increased. Waste management in Jordan was viewed as inadequate but improving prior to the crisis but since 2011, the volume of medical waste being produced has increased by 184 per cent, pharmaceutical waste by 250 per cent. Safely managing the health and environmental risks these forms of waste pose is a significant challenge.

Mainstreaming the environment in response and recovery

In 2014, and conscious of the political, social, economic and environmental demands it was facing, Jordan established a coordinated national response platform to cope with the Syria crisis. This unprecedented approach, which brought together government ministries, UN agencies and NGOs, reflects Jordan’s fear that the severity of the crisis will undermine its recent development gains, which in areas such as access to education have been significant.

An assessment on environmental vulnerability published by the response platform argues that mainstreaming environmental factors into refugee projects is crucial to reduce long-term harm and minimise community grievances. It calls for environmental risk assessments on all projects, more use of clean technologies across multiple sectors, the use of alternative income generation to limit impacts on natural resources and for the strengthening of national capacities for waste management and environmental monitoring. Meanwhile Lebanon, which is hosting a further 1m Syrian refugees, is facing a similar range of impacts. Speaking in New York in February, the Lebanese environment minister said that the cost of the priority interventions associated with the environmental impact of its refugee crisis could reach US$3bn.

The environmental impacts of humanitarian crises are not unique to countries like Jordan and Lebanon with limited resources or sensitive ecosystems. While governments, humanitarian agencies and international organisations are gradually doing better at mainstreaming the environment in response and recovery, much remains to be done. For many years, the traditional cluster approach to humanitarian response, which addresses issues such as shelter, health, water and food separately, has viewed the environment as a cross-cutting issue. The problem with cross-cutting issues is that without affirmative action by the stakeholders working on these clusters, the environmental consequences or benefits of projects can fail to be addressed during their design or implementation. This can have serious consequences for the sustainability and long-term impact of projects on the communities they are intended to help.

As Jordan is finding, a failure to fully integrate the environment into humanitarian response carries with it risks not only for public health and environmental quality but also political risks, as host communities face rising costs due to competition over natural resources. For nations whose politics, natural resources and ecosystems may be as fragile as each other, mainstreaming the environment in response and recovery must be a priority – not a luxury.

Doug Weir manages the Toxic Remnants of War Project. This blog was first published by The Ecologist.

How war in Tigray is threatening the success of restoration-based agriculture
April 26, 2022

Do mention the war: Why conservation NGOs must speak out on biodiversity and conflicts
April 11, 2022