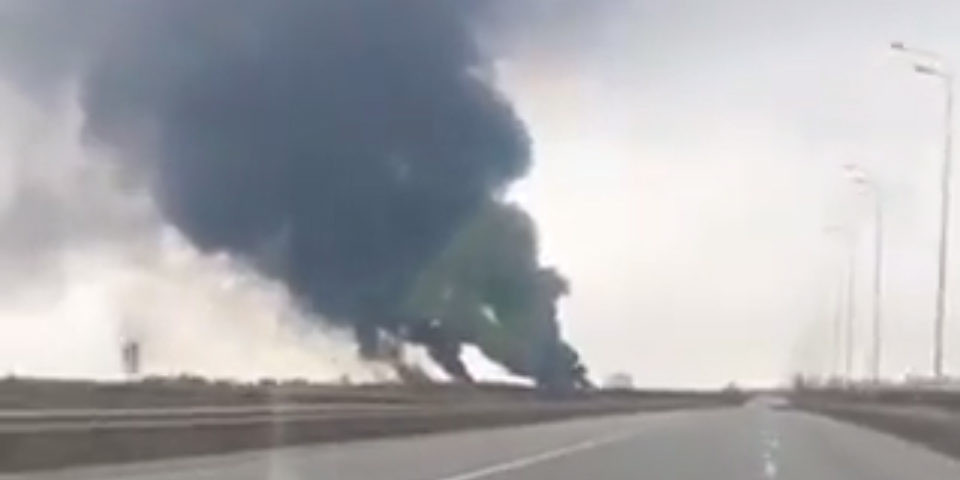 The conflict reveals the limits of state accountability for environmental harm in war.

Russia’s aggressive military invasion of Ukraine has provided the world with a stark reminder of the human and environmental costs of armed conflict. In this post, Rachel Killean examines the legal avenues that could be open for Ukraine in seeking accountability and redress for environmental damage.

In an open letter published on the 3rd March, the Environmental Peacebuilding Association decried the intentional occupation of nuclear sites, including Chernobyl, and emphasised the risks of military operations for the densely populated country’s human population and natural environment for years and decades to come. At the UN Environmental Assembly meeting in Nairobi last week, 108 NGOs highlighted the serious risks the invasion poses to ecosystems and expressed concerns over shelling releasing nuclear and toxic waste into the environment.

Russia’s attacks on military structures, urban areas and energy infrastructure have potentially international implications, through the release of widespread pollution into air, water, and onto land. Russia’s attacks on nuclear sites and power plants significantly exacerbate these risks. CEOBS has flagged Russia’s occupation of the Chernobyl site as increasingly dangerous, while the occupation of Zaporizhzhia Nuclear Power Plant in Enerhodar has attracted widespread international condemnation and raised fears of a nuclear catastrophe.

Both Ukraine and the international community have been quick to draw attention to the possibility of future criminal accountability for Russia’s actions. While much of this discussion has naturally focused on the human cost of the invasion, it is also worth exploring what options exist for pursuing accountability for the severe environmental impacts of Russia’s actions.

Domestic accountability for ecocide in Ukraine?

The occupation of the Zaporizhzhia Nuclear Power Plant has been described by the Ukrainian Prosecutor General’s Office and Security Service of Ukraine as both a terrorist act and the ‘commission of an ecocide’ requiring criminal investigation. The term has also been used to describe Russian shelling of the National Scientific Centre Kharkiv Physics and Technical Institute, where nuclear elements are stored as part of a research nuclear plant.

The use of ‘ecocide’ terminology is reflective of both the scale of the perceived risk and Ukraine’s particular legal context. Ukraine is one of a small number of states (including Russia) that have criminalised ‘ecocide’ through domestic legislation. Ukraine defines ecocide as ‘mass destruction of flora and fauna, poisoning of air or water resources, and also any other actions that may cause an environmental disaster’ in Article 441 of its criminal code. Should domestic prosecutions ever become feasible, it is certainly possible to see this Article being applied to acts of the Russian military.

Outside the domestic context, possibilities for pursuing international criminal accountability for environmental crimes perpetrated in Ukraine exist, but are likely to be somewhat limited. Most notably, the International Criminal Court’s Office of the Prosecutor has announced that it will open an investigation into crimes perpetrated in Ukraine, and the Prosecutor Karim Khan QC has stated that “there is a reasonable basis to believe that both alleged war crimes and crimes against humanity have been committed.”

In theory, Khan could choose to investigate the ICC’s eco-centric war crime. Under Article 8(b)(iv) of the ICC Rome Statute, the Court has jurisdiction over the crime of ‘intentionally launching an attack in the knowledge that such attack will cause…widespread, long-term and severe damage to the natural environment.’ However, to prove this crime in any subsequent trial, Khan would need to demonstrate that the damage to the natural environment was ‘clearly excessive in relation to the concrete and direct overall military advantage anticipated.’

The reference to the ‘advantage anticipated’ would present the prosecution with challenges, due to its focus on the subjective viewpoint of the alleged perpetrator. When coupled with the need for damage to be widespread, long-term, and severe, the crime’s framing has substantially reduced its applicability in practice. In fact, Article 8(b)9iv) has yet to be used in an ICC prosecution and is often considered impossible to prosecute.

Article 8(b)(iv) is currently the only explicit reference to environmental damage found in the ICC’s Rome Statute. Despite growing international support for the campaign to introduce ‘ecocide’ as the new ‘crime against peace’, its inclusion in the Rome Statute remains largely a matter of academic debate. Nor would the introduction of a new crime in future impact any prosecutions related to the situation in Ukraine, as the application of a new crime could not be retroactive. There is therefore no international equivalent to Ukraine’s criminalisation of actions that may ‘cause an environmental disaster’.

However, there are other avenues through which environmental harms might be considered in an ICC investigation. As myself and many other legal scholars have explored elsewhere, it may be possible to frame such harms as either a method or a result of other international crimes. Indeed, the ICC has previously acknowledged this possibility, and has gone so far as indicating that the Office of the Prosecutor would give ‘particular  consideration  to  prosecuting  Rome  Statute  crimes that  are  committed  by  means  of,  or  that  result  in,  inter  alia,  the  destruction  of  the environment,  the  illegal  exploitation  of  natural  resources  or  the  illegal dispossession of land.’

This approach offers possibilities for accountability. War crimes encompass attacks against civilian populations, attacks against civilian objects, the extensive destruction of property, intentionally launching attacks in the knowledge that the attack will cause loss of life or injury to civilians, and attacks that use indiscriminate weapons. Reporting on the conflict suggests that several examples of such crimes may be unfolding in Ukraine, and several organisations including CEOBS have been mapping the significant environmental impacts of these attacks. It may also be possible to connect environmental destruction to crimes against humanity, which include ‘inhumane acts’ committed as part of a ‘widespread or systematic attack directed against a civilian population.’

Prospects for accountability and repair

Previous examples of the ICC using its existing framework to prosecute environmental damage are limited, and the ICC’s inability to adequately prosecute environmental harm in times of either war or peace has been subject to sustained criticism. Yet, the examples highlighted above suggest that any ICC investigation into war crimes and crimes against humanity being perpetrated in Ukraine could include explicit recognition of the conflict’s environmental impacts. In doing so, the ICC could offer important acknowledgement and condemnation of the severe environmental costs of armed conflict.

While criminal accountability and reparations can feel very far away amid ongoing violence, the past week has demonstrated that there are a range of organisations and individuals committed to documenting the attacks in Ukraine and their environmental impacts. Such actions are testimony to the hope that peace may return to Ukraine, and that at a minimum, measures of accountability and repair will become possible. If they do, they will present an important moment in which international institutions can better recognise and address the relationship between conflict, environmental harm, and human suffering.

Dr Rachel Killean is a Senior Lecturer in the School of Law at Queen’s University Belfast, where her research interests centre responses to periods of violence and atrocity, including international criminal law and other transitional justice mechanisms. Rachel is on Twitter.