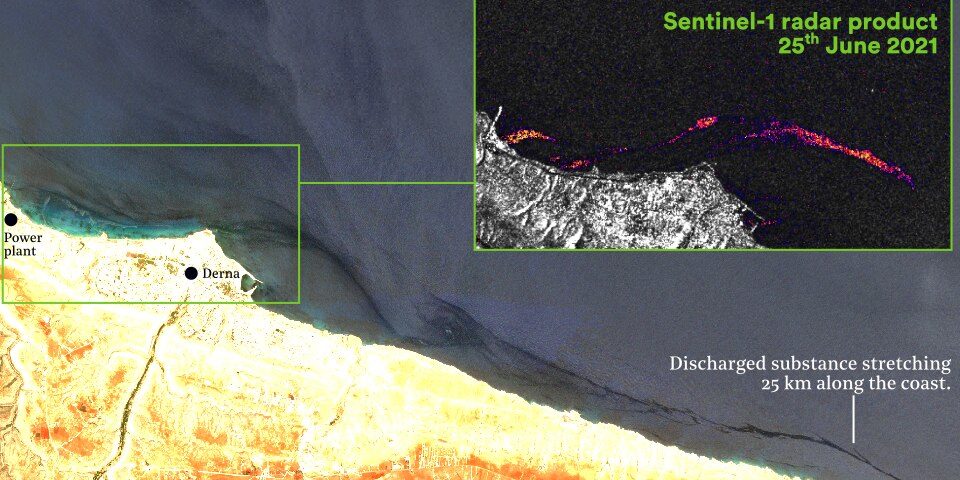 One of Libya’s power and desalination plants keeps leaking oil into the sea.

Following recent reports of coastal oil spills near the city of Derna in eastern Libya, Eoghan Darbyshire identifies the timeline and scale of the spills, their potential impact on marine wildlife and people, and how this pollution fits into the wider context of conflict-linked infrastructure decay in Libya.

The first report of an oil spill was on 14th June from the Libyan NGO Alhayat Organisation for Protection of Wildlife and Marine Organisms. Images showed dead sea turtles strewn on the beaches of Derna, with a diesel spill from its nearby power plant blamed.

On June 24th, photographs were released of oil slicks along the coast, and shared by Libyan media outlets, including the Libya Observer and Libya Panorama. These images were taken from a helicopter survey by the local branch of the governmental Environment General Authority, which has also compiled a report on the spills.

Observing the oil slick from space

Using satellite imagery, we identified three discrete spills in the waters around Derna. The first was on the 8th June 2021, and only visible for one day. The second discharge began on 22nd June and was visible along the coast until 25th June. The satellite imagery shows this discharge stretching more than 25 km eastwards along the coast from the power plant. A third incident occurred on the 1st July, only partially captured by the higher-resolution satellites and lasting just one day. We are unable to definitively identify the substance, but as it is visually close to known oil spills, and given the aerial photography, videos on social media, and report from the local environment authority, it seems reasonable to conclude it to be oil.

To investigate if the frequency of these discharges, we studied the Sentinel-2 archive back to January 2018. Two similar incidents occurred in May and June 2018, during the height of the battle for Derna, but subsequently there have been no such events until June 2021. This indicates the spills have not been an ongoing phenomenon, but have a more periodic source – continued monitoring is recommended to see how long the current spate of spills continue.

Identifying the source and causes of the spills

Given recent similar incidents, our first suspicion was an attack to a tanker at the delivery pipeline to the power plant.  Whilst there is a history of such attacks, no vessels were visible in the imagery. Likewise, although the power plant was shelled during the conflict, there have been no recent incidents since the October 2020 ceasefire.

A more likely explanation is the failure of critical components, possibly due to ill-maintenance, an inability to properly deal with waste either infrastructurally or via a knowledge gap, or an easy solution with an assumed impunity given Libya’s diminished environmental governance. These are all causes that will have been facilitated by the conflict – Libya’s oil infrastructure is known to be in a poor state.

The satellite imagery shows the discharges as emanating from the power plant compound, but the operation of the facility itself seems an unlikely source given that it remains idle, having suffered from military attacks during the siege of Derna in 2018. Offline and partly operational power plants are common across the country, and record energy demands and blackouts are placing infrastructure under further pressure.

However, the report by the local branch of the Environment General Authority identifies the source as drainage pipes from the fuel storage tanks, which have sustained damage and are inundated with standing oily water. Media and satellite images of the whole compound reveal this standing pollution, which has been present for more than two years – the report does not detail why the spills have only started in the past month.

The report does reveal that, although the power plant has not been in operation, the storage tanks have been rented to the desalination plant, and that the conflict has prevented maintenance by the contracted third party. The thermal power plant is operated by the state-owned General Electricity Company of Libya (GECOL). The desalination plant is operated independently and because of the lack of maintenance, we were told that it is about to stop working permanently. The facility was only completed in August 2010, just half a year before conflict broke out – this caused employees of the foreign operating company to leave.

The Environment General Authority report recommends that the spills be prevented immediately, even if this requires that the operation of the desalination plant is suspended. Further, it also warned of the danger posed to the entire site if these oil residues were to catch fire – such an event would not only have the potential for loss of life, but may also cause a local environmental health crisis through pollution of the sea, soil and air.

Libya’s coast is an important feeding and nesting area for turtles, seabirds and fish, and is home to regionally important seagrass beds, containing near pristine hotspots. The area between Derna and Tobruk is a known nesting area for loggerhead turtles. The critical ecosystem partnership fund shows key biodiversity areas to the west (Jabel Al Akhdar) and east of Derna (Al Fatayeh/Elfatayeh). Meanwhile, in 2020 the Global Environment Facility proposed establishing the stretch of coast between Derna and Ras Hila as a new marine protected area.

The wildlife along the coast, the ecosystem services they provide, and any future nature tourism, have already been impacted and remain at risk if these oil spills persist. The Environment General Authority report includes a veterinary autopsy of the dead loggerhead turtles, finding black oily substances within their respiratory tract and lungs, which likely caused death by asphyxiation. Also mentioned was the impact of the spills on phytoplankton, and sensitive species such as sea cucumbers and echinoderms, disrupting marine food chains.

As well as impacts to marine biodiversity hotspots, these coastal oil spills are potentially hazardous to humans. This includes to fisheries, but also if oil enters coastal aquifers used for potable or agricultural water. There is reported seawater intrusion into groundwater near Derna, which is likely to already be polluted.

Our historical analysis into the frequency of the oil releases also highlighted numerous other discharges into the sea off the coast of Derna. This includes the discharge of sediment from wadis, and discharge through pipelines of darker substances – potentially pollution, and which may also pose a threat to marine life.

These incidents all follow periods of heavy rain and perhaps reveal shortcomings with wastewater treatment in Derna – be that by design, or dysfunction. The lack and theft of spare parts, poor maintenance and frequent power cuts have all impaired wastewater plants in Libya, increasing discharges to the sea.

Discharge events are not confined to Derna and as such, further research is required to map the scale and environmental impact along the Libyan coast.