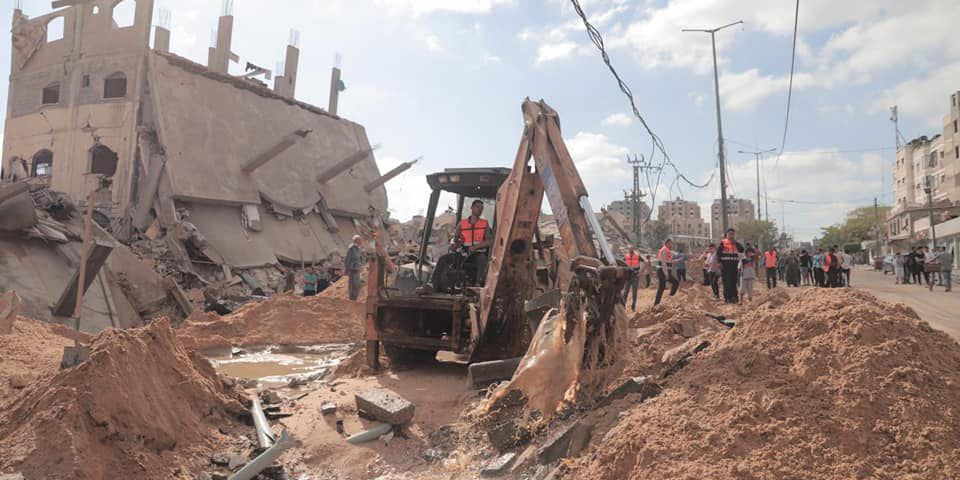 Reverberating civilian and environmental harm from explosive weapons use in Gaza

In a collaboration between Airwars and CEOBS, we explore the immediate and reverberating consequences of the use explosive weapons during the 10 day conflict in Gaza in May 2021.

On Friday 18th November, more than 80 states from around the world signed the Political Declaration on the use of Explosive Weapons in Populated Areas (EWIPA), the first international agreement aiming to limit the use of weapons with wide-area effects in towns and cities. This week, Airwars presents new research as part of our series ‘Mapping urban warfare’, exploring the grave harms associated with urban warfare.

This latest project, focusing on the Gaza Strip, was conducted in collaboration with the Conflict and Environment Observatory (CEOBS), a UK charity which aims to increase awareness and understanding of the environmental and derived humanitarian consequences of conflicts and military activities.

The Gaza Strip is reported to be one of the most densely populated areas of the world, with more than two million people living in the 360 square kilometre territory in 2021.1 Documenting the effects of urban strikes on Gaza shows part of a troubling contemporary pattern in which wars are waged in high population density areas – with devastating and long-lasting consequences for local communities.

Offering a glimpse into an area badly affected by airstrikes during the May 2021 conflict shows both the complex and lasting effects of strike impacts: alongside the fatalities and injuries sustained by civilians, we also show the reverberating environmental and socio-economic effects, including the legacies of damaged infrastructure and related pollution.

In May 2021, the short 11-day conflict between Israel and two Palestinian militant factions was no less devastating for its brevity. In December 2021, Airwars published an in-depth report, “‘Why did they bomb us?’ Urban civilian harm in Gaza, Syria and Israel from explosive weapons use” documenting urban strikes and civilian harm in Gaza following this escalation of violence. Some 1,500 declared Israeli air and artillery strikes reportedly targeted militants, weapons, and infrastructure, with the Israel Defense Forces (IDF) announcing 100 militants killed.

Airwars’ updated findings, also illustrated through an interactive map, identified 116 locally reported civilian harm events, accounting for a likely death toll of at least 151 civilians from IDF strikes. A further 15 and 20 civilian were killed in Gaza as a result of Palestinian militant rockets falling short. At least 554 Palestinians were reported injured by Israeli strikes. Around a third of reported civilian victims of those strikes were children.

The effects of explosive weapons during the May 2021 escalation in Gaza go beyond the initial strike impact, causing reverberating effects including damage to vital water and wastewater infrastructure.

Of the 290 water infrastructure ‘objects’ damaged in the May 2021 escalation, 109 were linked to wastewater – such as wastewater treatment plants and sewage pipes – according to the UN’s Water Sanitation & Hygiene (WASH) cluster. The UN estimated that this damage affected more than one million people.

One immediate impact was the outflow of untreated sewage into streets, visible across the strip via social media, into inland lakes, and into the Mediterranean Sea – as evidenced by satellite imagery, ground measurements by WASH cluster representatives, and media filming. Evidence also suggests that the prolonged conflict, together with discharges of untreated or partially treated wastewater, has exacerbated the risk of infections that cannot be treated by common antibiotics.

These incidents often happened as a result of militant targets being reportedly embedded within populated areas, the ‘metro’ system of tunnels. In its report of the May 2021 conflict, Airwars found that between 56 to 68 civilians were killed in four civilian harm events where Israeli forces reportedly targeted tunnels. Of these, at least 25 fatalities were likely children.

One of these incidents was the deadliest single event of the May 2021 Israeli-Palestinian conflict. As many as 49 civilians from three different families, including up to 18 children, were killed in a series of strikes that caused two buildings to partially collapse in the early hours of May 16th, when the IDF sought to destroy a tunnel and command centre beneath the street. Fahad al-Haddad, an emergency medicine specialist at al-Shifa hospital in Gaza told the New Arab that most of the dead brought to the hospital showed no external signs of injuries, meaning they were killed by the rubble that collapsed on them while they were still alive. New York Times footage from this event shows a huge crater in the street pooling up with sewage.2

The impacts from the damage to water infrastructure continued well after May 2021, with ground collapses and delayed damage to pipelines. Six months later, temporary fixes to provide a minimum service had been ongoing – but not completed owing to a funding gap and the ban on raw materials. Flash flooding in January,3 and November 2022,4 has occurred in areas with damaged wastewater infrastructure, with the damage blamed as a contributing factor.5 Another factor was the stormwater drains and storage ponds that were clogged with waste – this is an example of Gaza’s solid waste and wastewater crises acting in tandem.

It is under these types of conditions, where stormwater mixes with raw sewage, that health impacts can be most significant due the uncontrolled discharge of untreated wastewater. In future flooding may be exacerbated by climate change – projections of extreme rainfall in the region are complex, but in general it is expected to increase with more warming. The conflict and continued use of explosive weapons is reducing the climate resilience of Gaza, given capacity constraints and efficacy of the existing infrastructure.

The continued damage to wastewater infrastructure from attacks and explosive weapons use in Gaza acts to compound the impacts following decades of conflict, where WASH provisions fail to meet even the basic needs of the population, as outlined in a 2021 United Nations High Commissioner for Human Rights report. Although positive steps have been made recently, such as new treatment plants and the re-opening of beaches closed due to pollution, these are highly sensitive and may be reversed if explosive weapons continue to damage wastewater infrastructure.

These overlapping effects, which resulted from reported Israeli strikes in Gaza in May 2021, undermine the narrative that warfare is possible within urban environments without causing significant civilian deaths and injuries.

Where, when and how civilians have been harmed tells an important story about how choices made by belligerents can and do continue to have devastating impacts upon civilian lives – and clearly demonstrate why the use of explosive weapons with wide area effects in populated areas must be stopped.

As states sign the Political Declaration on EWIPA, Airwars and CEOBS urge nations to implement the declaration through improving national policies with robust mechanisms to protect civilians, civilian infrastructure and the environment. This means curbing the use of explosive weapons in towns and cities, saving countless human lives and preventing the environmental harm caused by the damage to critical infrastructure and by conflict-related pollution, whose legacy can last for decades.