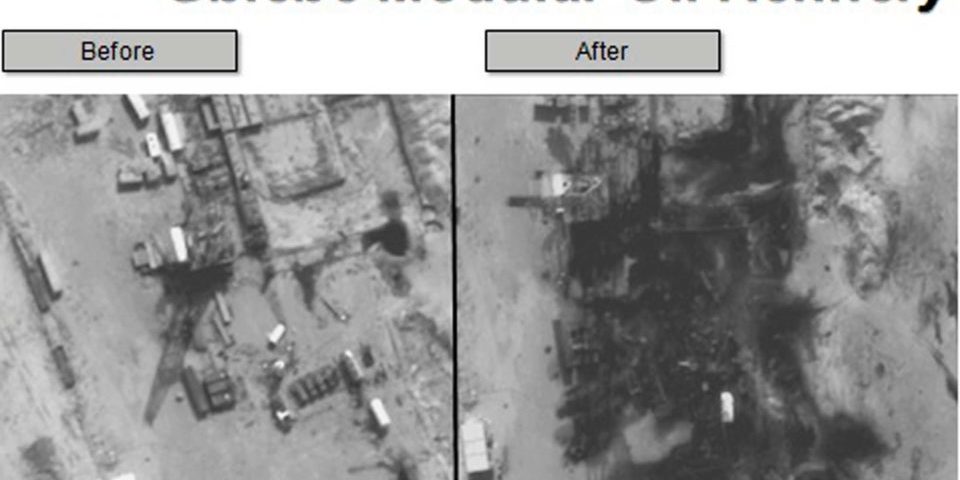 The US has begun bombing oil facilities in Syria, the move will have direct consequences for the environment but will also have indirect consequences as it compels communities to use harmful strategies to produce oil for heating and transportation.

On the 25th September, the US-led coalition conducting airstrikes in Syria began targeting oil refineries under the control of militants from Islamic State (IS). The TRWP has previously questioned the wisdom of targeting oil infrastructure, incidents that have the potential to generate significant environmental contamination. Beyond localised pollution, the targeting of Syria’s refineries may result in further indirect harm to communities and the environment in oil producing areas through encouraging polluting micro-refineries.

The initial round of airstrikes saw 12 small refineries targeted. Each was a modular refinery; these are built off-site, transported to the area for assembly and then operated for the processing of crude oil into a variety of lighter products, such as diesel fuel. Syria has comparatively modest oil and natural gas reserves, although prior to the current conflict they were a significant export earner, with the majority of sales to the EU. Unlike Iraq’s light crude, Syria’s heavy crude has a higher proportion of potentially hazardous contaminants, such as heavy metals. The density of heavy crude and its toxic constituents make it a particularly problematic soil and aquifer contaminant.

The targeting of refineries has the potential to generate significant localised contamination, the risks to civilians and the environment from which will vary depending on local environmental conditions, land use and population density. Soil and groundwater contamination is likely, as is air pollution from persistent fires. Images released by the US Department of Defense from two of their strikes, indicate significant surface contamination around the refineries. The environmental condition of the other 10 target sites is unclear as images have not been released.

In the press briefing following the strikes, the environmental risks of the strategy were raised by a press corps reporter. The response suggests that environmental considerations were not foremost in the minds of those planning the strikes. Answering questions, Rear Admiral Kirby said:

“I’m not an environmental expert. I can’t dispel the fact that in some of these targets there may still be some fires burning as a result of what was hit. Again, we’re working our way through the analysis right now.

“I think it’s important to note that these were refineries, and fairly small-scale refineries at that — 300 to 500 barrels per day was the max capacity — that doesn’t mean they were operating all of them at max capacity when we hit them or that they had that much.

“The crude had to get trucked in to these refineries to then get refined and then to be sold on the black market. So, you know, it’s possible that at some of them there wasn’t any. I just don’t know. We’re still working our way through that. But I can’t completely ignore the possibility that there might still be some oil fires burning because of this.”

The US justified the strikes as a means of hitting IS’s finances, arguing that:

“These small-scale refineries provide fuel to run ISIL operations, money to finance their continued attacks throughout Iraq and Syria, and they are an economic asset to support future operations. Producing between 300 and 500 barrels of refined petroleum per day, ISIL is estimated by some regional organizations to generate millions of dollars of revenue from these refineries.”

It is true that control over Syria’s oil and the black market trade in oil products has been a key element of the conflict domestically, with a number of rebel groups of various affiliations, local tribes and even families fighting over refineries and fields. The black market network of traders is supported by smuggling networks that move oil internally and internationally, particularly to Turkey, home to many illicit micro-refineries. Naturally the Assad regime also has a particular interest in maintaining access to oil products. Nevertheless questions remain over how much impact the loss of the refineries will have on the trade and IS’s coffers.

In addition to the small-scale refineries, Syria’s natural gas infrastructure has also been hit. A gas processing plant on the Kuniko oil and gas field was damaged on September 28th. The plant, where IS had apparently established a prison, provides gas to the Jander power plant in Homs, which supplies several provinces in Syria. Gas from the plant also supplies electricity generators in the Omar oilfield. The disruption of power distribution can have an indirect environmental impact, for example through shutting down water treatment plants.

International humanitarian law is somewhat circumspect on the legality of environmental harms from targeting decisions. The much derided thresholds of widescale, long-term and/or severe do little to constrain military actions and aren’t of much use in analysing their acceptability, particularly where environmental and humanitarian consequences can be indirect and unintended.

The Syrian Observatory for Human Rights reports that the price of diesel and petrol has already increased as a result of the attacks, with traders keen to cash in on the threat of airstrikes and fears over availability. Diesel is widely used for heating, agricultural machinery, bakeries and generators and with winter approaching it is likely that the civilian population will feel the impact of the strikes most keenly.

Another indirect effect is the likely increase in environmentally damaging artisanal refining. The loss of the modular refineries, with no overall drop in demand, will further encourage the processing of crude in small, highly polluting operations, whose environmental and civilian health impact has already been a cause for concern. Chris Harmer, senior analyst with the Institute for the Study of War told The Washington Post: “The airstrikes on the oil refineries were tactically spectacular but strategically insignificant. ISIS controls the oil fields. Destroying small oil refineries will just shift production from small refineries controlled by ISIS to micro refineries located in residential neighbourhoods.”

The targeting strategy has caused direct environmental pollution from the destruction of refineries – the actual impact of which is unlikely to become clear any time soon – and will lead to civilian suffering from soaring diesel prices and in all likelihood the further proliferation of highly polluting artisanal micro-refineries. If IS’s finances remain largely unaffected due to their control over crude production, was the environmental harm worth it?