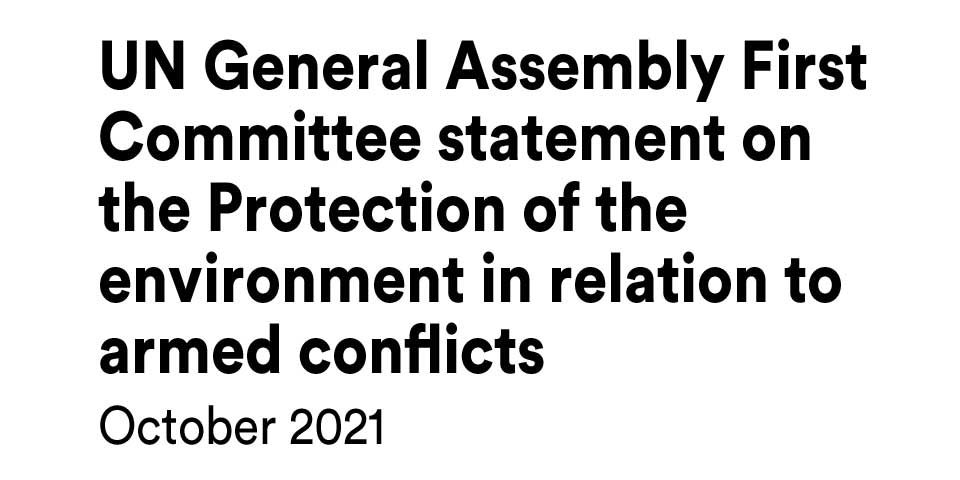 Delivered by Linsey Cottrell, the Conflict and Environment Observatory, on behalf of 16 organisations.

Environmental degradation undermines human health, livelihoods and security. The damage caused by armed conflicts goes far beyond that caused by the fighting itself. By destroying governance, the reverberating ecological consequences of conflicts can last decades.

How and where wars are fought, and how we respond to them, influences the environmental and humanitarian harm they cause. This should place the environment on the First Committee’s agenda, yet it receives little attention from delegations. Few connect the topics before them with the triple crises of climate change, biodiversity loss and pollution.

Take climate change. The environmental damage caused by conflicts makes communities and ecosystems less resilient, and governments less able to mitigate its effects. Emissions from military expenditure make a significant contribution to climate change. However, none of the militaries represented by the delegations in this room adequately report them to the UNFCCC. States wishing to lead on climate security, should first lead by example.

Take the pollution crisis. The use of explosive weapons in populated areas generates millions of tonnes of debris. As seen in Syria and Yemen, the infrastructure damage they cause releases hazardous materials, contaminating soils and groundwater. Whether from weapons testing in peacetime, or waste abandoned by militaries, all too often pollution is seen as a part of doing business.

Delegations can start addressing these problems.

At COP26 in Glasgow, states should commit to improving the reporting of their military emissions. At COP15 – the UN Biodiversity Conference – they should ensure that the Post-2020 Biodiversity Framework confronts how conflicts, weapons and insecurity will prevent its implementation.

Before the political declaration on the use of explosive weapons in populated areas is finalised, states should ensure that it fully addresses the environmental consequences of their use, and of urban recovery.

Similarly, states funding or benefitting from programmes to address mines and explosive remnants of war, should identify how clearance work could also contribute to mitigating climate change and biodiversity loss.

Until states make the connection between the environment, peace and security, conflicts and military activities will keep exacerbating the environmental crises we face. This committee must play its part in mainstreaming this agenda, in this room, and across the UN system.

This statement was delivered on behalf of the following organisations:

The COP where we began talking about conflict emissions
December 15, 2022
Go to Top