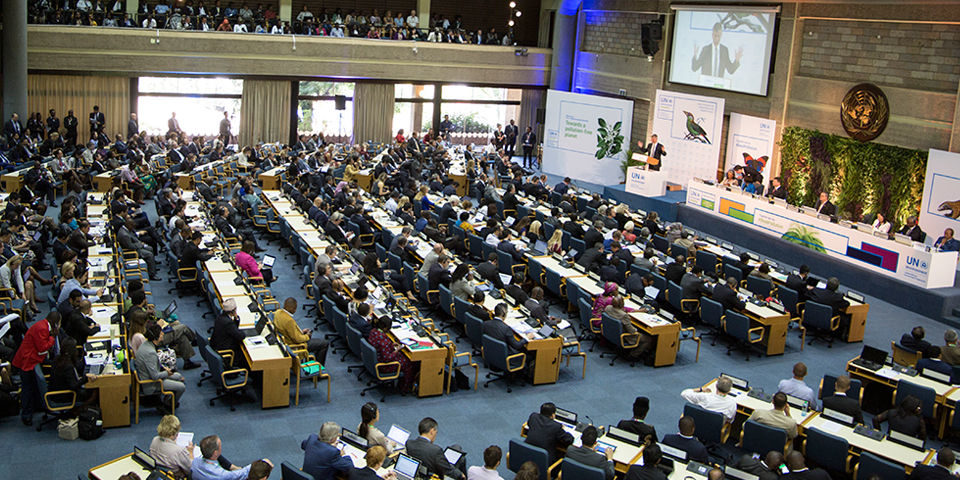 The third meeting of the United Nations Environment Assembly has passed the first ever United Nations resolution addressing conflict pollution, but how will it be implemented?

The United Nations Environment Assembly has adopted a resolution urging states to minimise and mitigate the health and environmental consequences of pollution caused by armed conflicts and terrorism. It is the first time that a UN decision has addressed the topic in such detail, and recognised the diverse means through which conflicts can generate or facilitate pollution.

The resolution, ‘Pollution mitigation and control in areas affected by armed conflict or terrorism’ which was tabled by Iraq, and sponsored by Ukraine and Norway, was adopted at the third meeting of the United Nations Environment Assembly (UNEA3) on December 6th, after three months of sometimes difficult negotiations. The resolution had been motivated in part by Iraq’s recent experience of the widespread and severe pollution caused in the battle against the so-called Islamic State. But it also reflects the growing acknowledgement by states of the environmental and derived humanitarian consequences of warfare. Members of the Toxic Remnants of War Network were present at UNEA-3 to observe the negotiations on the resolution and advocate for a progressive outcome.

Outcome of the negotiations

We were relieved that the five tests that our Network had set to determine whether the resolution would be a success before UNEA were largely met. However we remain concerned that language on the importance of preventing pollution was watered down, and that references to the environmental risks of targeting industrial facilities, and the transboundary threats of pollution, proved too contentious and were removed. Nevertheless, we were heartened that normative language on key humanitarian principles, such as rights and gender were not contested by states.

As with UNEA-2’s resolution on the ‘Protection of the environment in areas affected by armed conflict’, the negotiations highlighted profound differences in opinion between states on the role of environmental factors in fuelling insecurity. And, as the text also addressed terrorism, these differences proved particularly stark, in spite of these linkages being increasingly considered by the UN Security Council.

These differences also manifested themselves in disagreement over how the terms terrorism and terrorist acts were used in the text; ultimately requiring that a paragraph clarifying both this, and the relationship between terrorism and UN Environment’s mandate be inserted. Another key concern for some states was the question of which legal frameworks should be used to interpret the resolution. This too necessitated the inclusion of a clarifying paragraph.

In spite of these issues, the text is the first of its kind to primarily focus on the generation and harm caused by the toxic remnants of war, and its passage helps place the topic alongside other conflict and environment themes, such as natural resources, which have already been addressed by UN bodies. It is also one of only two resolutions from a high level UN body linking terrorism with environmental harm.

In addition to the resolution, UNEA also reached consensus on a ministerial declaration on pollution which, in calling for action on all of the topics under discussion at UNEA-3, commits states to work towards a pollution free planet. Paragraph five of the declaration addresses conflicts and terrorism: “We are concerned by the legacy of damage and pollution that armed conflict or terrorism causes to the environment, often delaying recovery, undermining the achievement of sustainable development and threatening the health of people and ecosystems.” The topics of conflict and military pollution also featured in a number of national, regional and civil society statements during the plenary.

As noted above, states didn’t question the inclusion of language on the relationship between sustainable development, the environment and human rights. Nor did they question the fact that pollution has specific gendered impacts and that these must inform how we respond to contamination. Similarly, the fact that pollution poses particular risks for people in vulnerable situations was also accepted without comment. The text also addresses the socio-economic impact of conflict pollution, caused for example by the loss of biodiversity or access to agricultural land.

In articulating the relationship between environmental degradation and the protection of civilians, the resolution continues the anthropocentric approach established by UNEA-2’s resolution in 2016. While such a humanitarian approach is critically important, in future it may be necessary to ensure that this is properly balanced with the need to protect the “natural environment”.

The resolution: sources and conduct

Although language on the risks posed by the deliberate targeting of industrial and military facilities proved unpalatable to some states, the targeting of other types of environmentally hazardous infrastructure made the final draft. This includes water, power and sanitation networks and residential properties. Some states proved reluctant to use the term “scorched earth policies” but these practices were alluded to in the targeting of natural resources.

Alongside these direct forms of conflict pollution, indirect sources were also addressed, including the loss of environmental governance and waste management, and the polluting coping strategies that affected communities are often forced into by conflicts: for example the explosion of artisanal oil refining in Iraq and Syria. Two other sources that were included were pollution from the illicit extraction of natural resources, and the risks from the movements of hazardous waste.

The resolution: response to harm

The resolution stresses the need for the swift identification, assessment and remediation of pollution impacts, and urges governments to take appropriate measures to minimise and control pollution in situations or armed conflict or terrorism. It also stresses the particular importance of preventing the pollution of rivers and aquifers – although efforts to specifically reference transboundary water resources in this regard were rejected. The text also invites greater direct cooperation between states on preventing, minimising and mitigating the negative effects or conflicts and terrorism on the environment as a whole.

As the text needed to reflect the important role that affected communities should play in efforts to address conflict pollution, we were pleased that language on inclusion made the final version. OP6 of the text encourages the participation of all actors on the national level – including affected communities – in the preparation and prioritisation of plans for assessment and remediation projects. It also highlights the importance of linking environmental and health data in determining harm to public health.

In identifying the indirect effects of conflicts on environmental governance, the resolution also invites UN agencies, international organisations and other relevant stakeholders to collaborate closely with UN Environment, not only in the provision of technical assistance to states affected by conflict pollution, but also in ensuring the implementation of international agreements on chemicals and in rebuilding national capacity for governance more generally.

A small number of states made clear during negotiations that UN Environment’s mandate on conflicts should be restricted solely to post-conflict assessments and technical assistance. Others are more supportive of the reality that human security requires that the environment be fully considered throughout the cycle of conflicts. This tension played out in 2016, and again this year, nevertheless, the resolution welcomes UN Environment’s work on the protection of the environment in areas affected by armed conflict or terrorism.

In general, the resolution encourages UN Environment to do more of what it does at present, encouraging field visits by its Executive Director to affected areas, and undertaking field-based and post-crisis environmental assessments and recovery. However the text also provides some space for the Executive Director to explore ways to improve its work on conflict pollution, with the caveat that this is in conformity with its mandate and without new financial resources. How this will develop remains to be seen.

Implementation of the resolution

Which raises the wider question of implementation: in the run-up to UNEA-3, the TRW Project circulated a questionnaire to all delegations in Nairobi with four questions on implementation, based on the commitments for governments in 2016’s resolution. No responses were received. UN Environment provided a report on its own implementation of the 2016 resolution at UNEA-3, which revealed that, while it had worked on a number of projects relevant to the resolution, in the absence of additional resources the projects amounted to business as usual. Meanwhile, civil society has been working to implement the resolution, primarily on its commitment on awareness-raising. For PAX this has included data collection in Iraq, and for the TRW Project the launch in early 2018 of a new UK charity The Conflict and Environment Observatory.

While the resolutions at UNEA are not binding on states, at present there is a clear gulf between their engagement and interest during negotiations, and their subsequent implementation of the commitments that they agree to. Absent a mechanism to monitor and encourage implementation by states, and new resources for UN Environment to implement programmes, it would appear that civil society will be in the strange situation of being the primary agent delivering on UNEA commitments.

Although non-binding, UNEA resolutions have a significant normative value. By raising the profile of the causes and consequences of the toxic remnants of war, this resolution complements the growing body of UN resolutions on the environmental dimensions of armed conflicts. As with the UNEA-2 resolution, it seems likely that the text will influence other processes, such as the ongoing work of the International Law Commission on the Protection of the environment in relation to armed conflicts. The text is also valuable in reaffirming UN Environment’s mandate on conflicts in the face of objections from a small number of states.

That it addresses both armed conflicts and terrorism is a new departure. Examination of the relationship between non-state actors, environmental degradation and insecurity is under-developed in the outputs of UN fora. Yet in an era of increasingly complex armed conflicts, and growing environmental pressures, it seems vital that the international community explore this phenomenon further.

For us however, the key outcome is whether the resolution will contribute to a reduction in civilian and environmental harm from conflict pollution. This means influencing the conduct of the state and non-state actors responsible for pollution, and increasing assistance to the communities their actions harm – something that risks being overshadowed by the disagreements between states on what constitutes human and environmental security.

Doug Weir manages the Toxic Remnants of War Project, and would like to thank Norwegian Peoples Aid and Zoi Environment Network for their support before and during UNEA-3.