Vatican encyclical: “War always does grave harm to the environment” 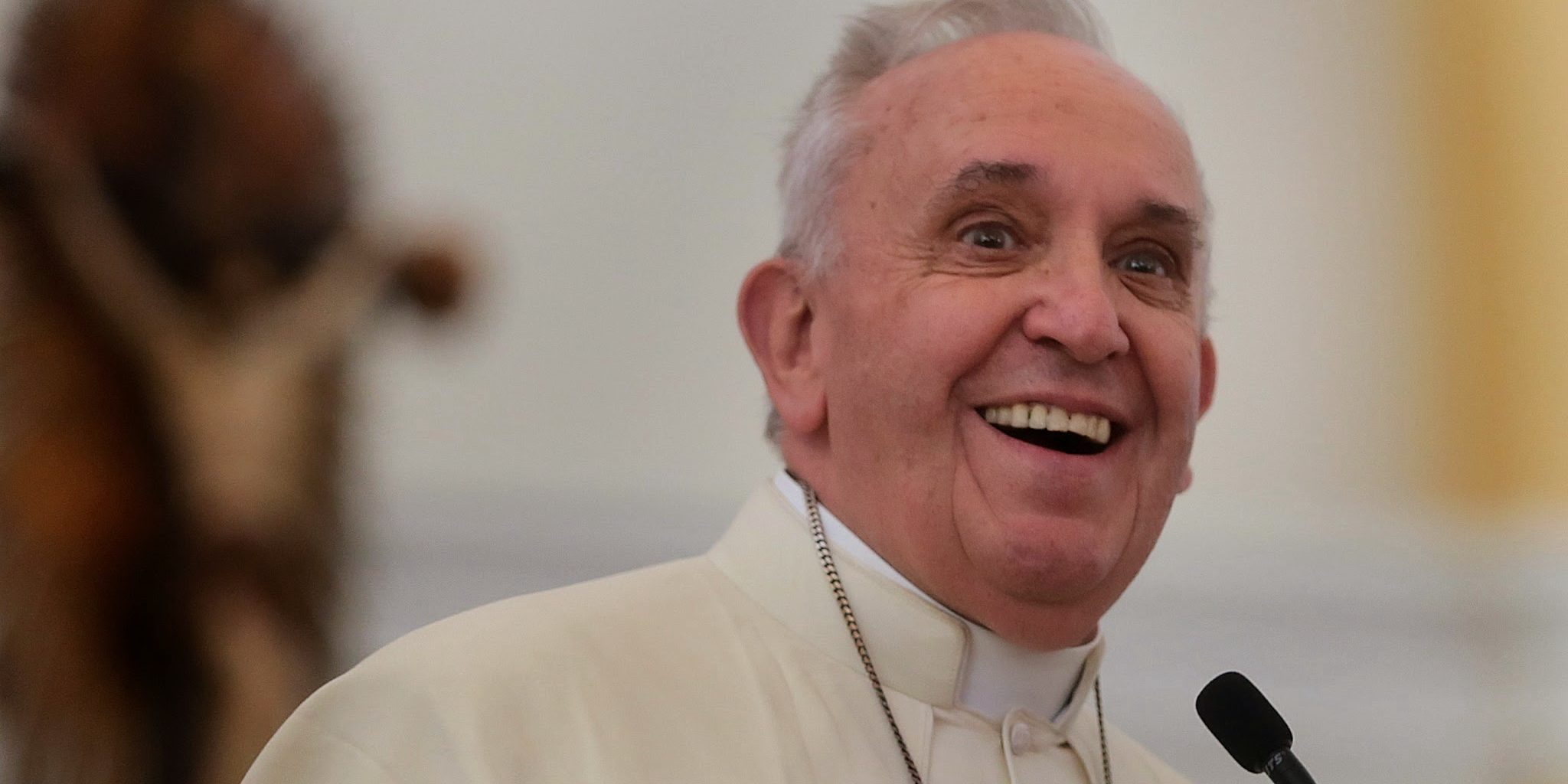 From pollution, to climate change and resource wars, the latest encyclical from Pope Francis calls for action on environmental protection.

The Vatican’s latest encyclical ‘Care for Our Common Home’ has triggered much rejoicing from the environmental movement, and justifiably so, coming as it does in the run up to the latest round of climate change negotiations. But in questioning the global economic order and its depredations on the planetary environment, Pope Francis has also sought to communicate a wide range of problems that have blocked progress on environmental protection. There will be much interest in the repercussions from what many may view as a radical agenda for global environmental reform.

On chemical pollution and waste, Francis observes that: “The earth, our home, is beginning to look more and more like an immense pile of filth”. [21] But, in common with the rest of the text he underscores the connection between contamination and the health of the poor and vulnerable, by noting that even in locations known to be polluted: “frequently no measures are taken until after people’s health has been irreversibly affected” and “both everyday experience and scientific research show that the gravest effects of all attacks on the environment are suffered by the poorest”. This has often proved the case in peacetime, where those with the least social and political capital have been forced to live or work in proximity to hazardous sites. It has also proved true following conflict, where the barriers to effective data collection on environmental risks are higher, and effective governmental response may be wholly absent.

Pope Francis bemoans the absence of political leadership on environmental protection, calling for effective regulatory approaches to ensure that we are not overwhelmed by the technological and economic interests of the few:

“The establishment of a legal framework which can set clear boundaries and ensure the protection of ecosystems has become indispensable; otherwise, the new power structures based on the techno-economic paradigm may overwhelm not only our politics but also freedom and justice.” [53]

On the need for clear boundaries

While it is written in general terms, it’s not hard to find parallels with the current state of protection of the environment during conflict. Indeed a good example emerged this week in the Pentagon’s newly published Law of War Manual. Beyond the comparatively narrow remit of the ENMOD Convention and its ban on the use of environmental modification as a weapon of war, the manual questions the validity of the derived customary rules of articles 35 and 55 of Additional Protocol I:

Article 35(3) of the 1977 Additional Protocol I: It is prohibited to employ methods or means of warfare which are intended, or may be expected, to cause widespread, long-term and severe damage to the natural environment.

Article 55(1) of the 1977 Additional Protocol I: Care shall be taken in warfare to protect the natural environment against widespread, long-term and severe damage. This protection includes a prohibition of the use of methods or means of warfare which are intended or may be expected to cause such damage to the natural environment and thereby to prejudice the health or survival of the population.

The new Pentagon manual states that: “The United States has not accepted these provisions and has repeatedly expressed the view that these provisions are ‘overly broad and ambiguous and ‘not a part of customary law.’”. This view runs counter to that of a large number of militaries. It also appears to be retrograde step as the US’s 1993 US Operational Law Handbook did acknowledge the rule. The objections of the US and UK appear to be framed around the legality of the use of nuclear weapons, subsuming the wider question of methods and means into the impact of a single type of weapon. While the usefulness of the provisions is regularly challenged by legal scholars, it is typically driven by specific concerns over the ambiguous nature of the long-term, widespread and severe thresholds, not by the legality or otherwise of specific weapons.

The ease with which states sidestep even the most modest of requirements to protect the environment chimes with Pope Francis’ view that more robust systems of protection are necessary, although he is particularly scathing of current global responses and international conferences, which he argues are weakened by short sighted special interests, ensuring that:

“the most one can expect is superficial rhetoric, sporadic acts of philanthropy and perfunctory expressions of concern for the environment, whereas any genuine attempt by groups within society to introduce change is viewed as a nuisance based on romantic illusions or an obstacle to be circumvented.”[54]

Needless to say, this will resonate with many in the environmental field.

Although the overarching focus of the encyclical is climate change, with only a few specific references to weapons or the environmental impact of war, the links between natural resources and conflicts do get a special mention:

“It is foreseeable that, once certain resources have been depleted, the scene will be set for new wars, albeit under the guise of noble claims…Politics must pay greater attention to foreseeing new conflicts and addressing the causes which can lead to them.” [57]

The interconnectedness of things

Natural resources and conflicts are just one of a number of areas where environmentalists will be pleased that Francis has underscored the interconnectedness of environmental issues. However in promoting his brand of humanitarian environmentalism, he also gives thought to the need to protect the environment for its own sake, setting this out through a detailed consideration of Christian scripture. He also challenges the deep-seated idea that humanity has dominion over the Earth and is free to use it as it wishes:

“Although it is true that we Christians have at times incorrectly interpreted the Scriptures, nowadays we must forcefully reject the notion that our being created in God’s image and given dominion over the earth justifies absolute domination over other creatures.” [67]

Francis advocates for a new ‘ecological culture’ that reflects this interconnectedness, but cautions that it: “…cannot be reduced to a series of urgent and partial responses to the immediate problems of pollution, environmental decay and the depletion of natural resources.” 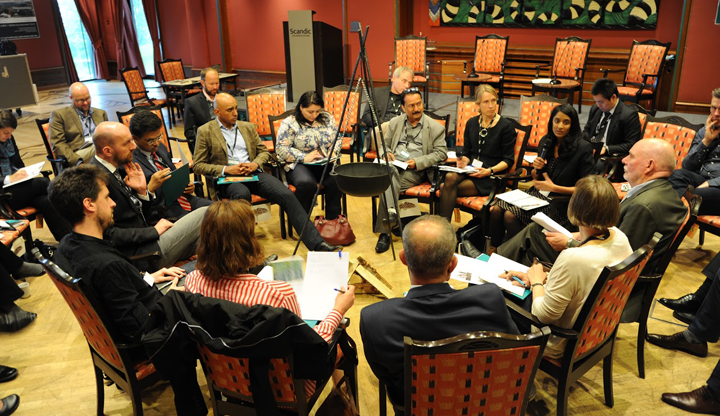 The TRWP’s Aneaka Kellay asking whether post-conflict environmental response could be improved through new regulatory approaches at the UNEP/OCHA Environmental Emergencies Forum.

The TRWP recently attended the UNEP/OCHA Environmental Emergencies Forum in Oslo and was impressed with the projects being planned and implemented globally to reduce the health and environmental risks from industrial accidents and natural disasters. There was much talk of building resilience, but less on tackling the root causes of such emergencies. While such global efforts were perhaps beyond the scope of the meeting, Francis identifies this elephant in the room by arguing that: “To seek only a technical remedy to each environmental problem which comes up is to separate what is in reality interconnected and to mask the true and deepest problems of the global system.” [111]

The encyclical challenges humanity’s dislocation from nature, particularly the refusal, or inability, to consider the environmental impact of society’s policies and actions, something that seems particularly relevant to the current failure to properly monitor the environmental and health legacy of conflict. Francis argues that this feeds humanity’s sense of dominion over nature:

“Neglecting to monitor the harm done to nature and the environmental impact of our decisions is only the most striking sign of a disregard for the message contained in the structures of nature itself.” [117]

Turning again to the need for regulation, Pope Francis praises the environmental movement and its work to get green issues on the global agenda, but again regrets the failure of political will that has obstructed progress. He praises the 1992 Rio Earth Summit, its principles, agendas and declarations. He also welcomes the international agreements on hazardous wastes, the ozone layer and the trade in endangered species but regrets that Rio’s “accords have been poorly implemented, due to the lack of suitable mechanisms for oversight, periodic review and penalties in cases of non-compliance. The principles which it proclaimed still await an efficient and flexible means of practical implementation.” [167] He argues in favour or more international agreements that are enforceable, while respecting state sovereignty, arguing that: “Global regulatory norms are needed to impose obligations and prevent unacceptable actions.” [173] Perhaps conflict and the environment is one such area ripe for progress?

It is not the message of the encyclical that will surprise environmentalists, the arguments made are well trodden and explored, what makes this different is the messenger. Coming as it does from the head of the Catholic church seems like a notable departure and, while many of a more conservative bent will see this as a radical and terrifying agenda, it may also serve to reinforce the notion that radicalism is subjective and that sooner or later views can be mainstreamed, if and when the conditions allow it.