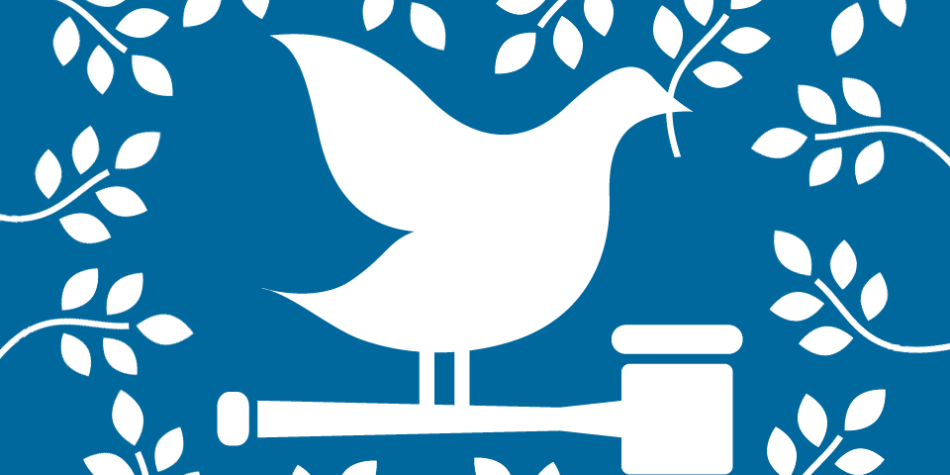 Could the process towards the SDGs finally encourage greater consideration of the environment throughout the conflict cycle – and as both a question of state security, and human security?

The international community is currently underperforming when it comes to integrating the environment into matters of peace and security. Climate change and contemporary armed conflicts are forcing a re-evaluation of this at times complex relationship but in general, the environment remains under-prioritised – as evidenced by its absence from Goal 16 of the Sustainable Development Goals (SDGs).

Goal 16 of the SDGs seeks to promote peaceful and inclusive societies for sustainable development, provide access to justice for all and build effective, accountable and inclusive institutions at all levels. Like many others before and since, a 2011 study by the World Bank clearly showed that conflict and insecurity hamper sustainable development. It would therefore have been unusual for peace and security not to be included in the SDGs. Russia nevertheless objected to their inclusion on the grounds that it would introduce an “artificial politicization” and that “…peace-building, rule of law and human rights have their own well-established intergovernmental processes”. For their part, NGOs were adamant that the SDGs, like peace itself, required the attainment and assurance of fundamental human rights. They would receive a major endorsement when Ban Ki-moon’s High-Level Panel of Eminent Persons made “peace and effective, open and accountable institutions for all” one of their five key objectives for the SDGs.

Interpreted loosely, the targets comprising SDG16 could relate reasonably well to some of the environmental dimensions of armed conflicts. However, the performance indicators currently being developed by a UN committee will introduce a level of specificity that could preclude this. A proposal that governments must record all conflict-related deaths is welcome, but what of ill health or lost livelihoods caused by conflict pollution or wartime environmental degradation? Similarly, the environment is absent from any indicator for the promotion of the rule of law and access to justice – for example on land rights or resource management. For natural resources in conflict settings, the only directly relevant draft indicator is the requirement on governments to improve the recording of illicit financial flows.

Naturally some may argue that the environment is dealt with by the other SDGs, such as those dealing with terrestrial and marine ecosystems, chemicals or health. Yet here again, few of the proposed indicators under these SDGs relate specifically to armed conflict. But it is the environment’s absence from SDG16 which is perhaps most symptomatic of the low priority afforded to the environment in matters of peace and security. This is a troubling oversight as UNEP has found that at least 40 per cent of all violent conflicts in the last 60 years have been linked to natural resources, resources that are set to be further degraded by climate change and increasingly intense natural disasters. During the development of the SDGs, this led UNEP to argue that the sound stewardship of “…resources, including access to information, inclusive decision-making, equitable benefit sharing, and rule of law are essential to mitigate these risks and help create resilient and peaceful societies.”

Is there a reason for the environment’s apparent exclusion from SDG16? Reviewing the recommendations from many of the leading human rights and development NGOs that advocated for the inclusion of a strong SDG on peace and security, it’s clear that its environmental dimensions were low on their agendas; whereas for the environmental NGOs, attention was largely focused elsewhere – on marine life, forests or conservation. This siloing was unfortunate because current crises continue to highlight the importance of integrating the environment more fully into our thinking about the causes and consequences of conflicts.

Lessons from Syria on the environment and security

The Syrian crisis is a clear demonstration of why we must better integrate the environment into peace and security policy-making and practice. When researchers argued that climate change and an ensuing drought had played a role in creating the instability that led to the conflict in the run up to the Paris COP21 climate talks last year, the world’s media took note. For some, Syria was merely the latest stage in a process to securitise climate change, and in so doing help create a compelling state-centric narrative for global action. This was a process initiated by military think-tanks and which has now seen climate change defined as a “threat multiplier” – rather than a direct cause of conflict in and of itself. Meanwhile those opposed to the securitisation of climate change argue that this framing risks overwhelming humanitarian priorities such as adaptation, mitigation, resilience and justice for affected communities.

The attempt to link climate change with the Syrian conflict, as earlier with the conflict in Darfur, elicited a backlash from some climate scientists, particularly when public figures like Al Gore and Prince Charles promoted the idea. Opponents argued that the studies were speculative, that the data were incomplete and that the political context of the urgency behind the Paris deal was skewing interpretations. The scientific jury remains out, with some arguing that the link between climate and conflict is clear, others that it is yet to be conclusively proven based on the historical record. Studies have shown that the region has suffered a drought more intense than could be expected by natural variation alone but the data linking this to the outbreak of the conflict are less clear. Still others argue that Syria’s steppe is naturally drought tolerant and that the real problem has been the systematic and long-running mismanagement of grazing lands. Beyond the specifics of the Syrian conflict, it is inescapable that climate change is happening and that the effects that are predicted have the potential to negatively influence the socio-political conditions in affected countries. Therefore in all likelihood, climate change will interfere with the objectives set out in SDG16.

Human displacement and migration allow the consequences of environmental problems associated with conflicts, climatic change and variability to be transmitted locally and regionally. This can translate into environmental consequences for neighbouring countries, as well as political instability for governments far removed from conflict-affected areas. This is a pattern of connectivity that seems likely to become ever more apparent as climate change intensifies; as UNEP’s Disasters and Conflict Coordinator Oli Brown recently observed:

“When you look to the root causes of migration, more often than not environmental change or mismanagement is in there somewhere.”

For Jordan and Lebanon, rapid urbanisation, fragile and resource-scarce ecosystems and huge refugee populations are combining to create environmental risks that threaten stability. As its population has surged in the wake of the Syrian conflict, Jordan has seen rapid increases in illegal timber collection, overgrazing and wildlife poaching. Levels of air pollution from vehicle and industrial emissions have risen and its waste management sector has been stretched by growing levels of hazardous waste. The government has made tackling these issues a priority so as to minimise threats to public health and environmental quality and defuse community grievances.

Within Syria, the precise extent of the damage to the resources upon which the civilian population depends for life and livelihoods is yet to be fully assessed, although early indications show that the environmental degradation caused by the conflict has been significant. When coupled with the pollution caused by the widespread destruction of urban and industrial areas, the collapse of environmental management and services and the future health and economic inequalities this will create, it seems inevitable that environmental quality and access to resources will strongly influence Syria’s chances of recovery and its eventual transition into a peaceful and inclusive society.

The jury may still be out on the precise role that climate change played in Syria but it seems impossible to exclude it as a risk factor for future conflicts. Climate aside, it’s clear that displacement and the direct environmental damage caused by the conflict within Syria will have repercussions for the goals and spirit of SDG16. These are not problems unique to the Syrian conflict and serve to underscore the importance of the environmental dimensions not only of peace and security but also of sustainable development itself.

Sustainable development: not just a set of targets

That the proposed SDG16 indicators risk failing to specifically address many of the environmental dimensions of armed conflicts and insecurity, be they on resource management, migration, human rights or environmental degradation, is unfortunate. All the more so because for many countries it will be conflicts that invariably present the greatest challenge to them achieving the SDGs.

But the true value of the SDGs is unlikely to be found in their rigid targets or indicators. Their greatest strength could instead be as a framework through which to understand and communicate the interconnectedness of all these themes. The path towards the SDGs should therefore encourage governments and civil society to more fully consider the role that the environment plays throughout the conflict cycle – from trigger to victim – and how the consequences of environmental change care little for national borders.

In this respect, while the SDG indicators may lack the precision necessary to fully articulate the environmental dimensions of peace and security, as a process the SDGs should serve to encourage the long-overdue mainstreaming of the environment in this field. However because of the low prioritisation afforded to the environment across many sectors but particularly in peace and security, there will inevitably be a temptation to present the environment as part of a traditional state-centric security threat, rather than a question of human security. While this could help increase visibility and engagement in the short-term, as with the securitisation of climate change, it could also risk ignoring the needs of the communities and individuals who bear the brunt of the environmental causes and consequences of conflicts.