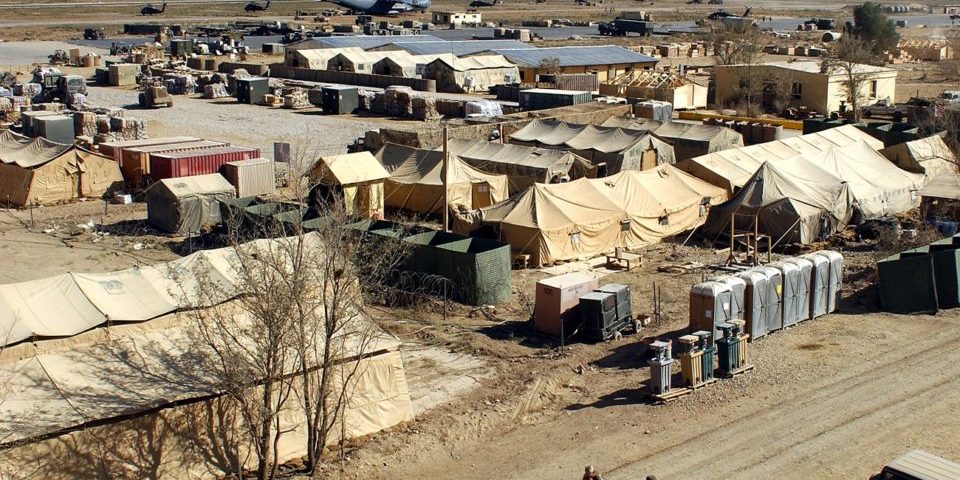 The history of military overseas presence carries with it numerous examples of environmental damage and very limited means of redress for states hosting militaries. Without greater attention Afghanistan looks set to be another case.

Since 2001, Afghanistan has seen intensive military activities from a number of countries that have contributed to the ISAF stabilisation force. With the drawdown of ISAF forces and a number of base closures under way, Aneaka Kellay investigates the toxic remnants of ISAF’s operations and who is currently liable for the clean-up.

ISAF has been deployed in Afghanistan since 2001. In August 2003, NATO assumed command of the operation and its mandate has been repeatedly extended by the UN Security Council. During the 2010 Lisbon Summit, NATO agreed to begin a process of transitioning full responsibility for national security to Afghanistan. The transition is due to end in 2014 and has involved a significant reduction in troop numbers.

More than 1200 ISAF-occupied properties are expected to be closed and handed back by the end of 20141 and military bases are known to leave a toxic footprint. This has been a significant issue in both home states2 and in countries hosting military bases such as South Korea3, the Philippines4 and Panama.5 While contingency operations differ slightly, there is a strong indication that military pollution will be left in Afghanistan placing people and the environment at risk and it is therefore essential that ISAF takes steps to avoid this legacy.

ISAF forces comprise troops from 48 nations.6 The largest force within ISAF by a very wide margin is the United States (US). While the vast majority of ISAF installations are run by the US Army, a number of other states have maintained installations in Afghanistan including: Canada, the UK, France, Poland, Germany, Norway, Australia, the Netherlands and Italy. Alongside the military, a substantial number of Private Military Security Companies (PMSCs) continue to operate in Afghanistan, engaged in a broad spectrum of security and support services for ISAF.

Burn pit at a command outpost in Kandahar Province, 2013.

The Toxic Remnants of War Project has analysed ISAF activities that could generate toxic remnants in the course of preparing a briefing on the issue. Sources and activities of concern include the scrap metal trade, the use and abandonment of firing ranges, waste from base closures, burn pits, the destruction of surplus munitions and contamination from normal base operations. Substances of concern are diverse, and range from heavy metals and the residues of energetic materials to benzene, PCBs and fuels. These activities and substances present a risk to civilian health and the Afghan environment.

Whose mess is it anyway?

In 2015, new agreements between NATO, the US and Afghanistan will be signed that outline the status of foreign forces in Afghanistan for the next ten years, but at present legal liability for military pollution from ISAF’s activities remains complex.

The ISAF Security Council mandate, which has been extended on a yearly basis since 2001, contains no environmental protection language. Elsewhere, the ISAF Military Technical Agreement (MTA)7 (2002), a political agreement between ISAF and the Afghan government, again makes no specific reference to liability for military origin environmental contamination. It does however state that forces will ‘respect the laws of Afghanistan’ as far as they are compatible with the UNSC mandate, and that ISAF will not be liable for property damage.

While Afghanistan’s environmental law was strengthened in 2007, as of 2008 this had not been translated into US military policy.14 To interpret Afghan Law into US policy, final governing standards (FGS) must be developed. However the US is not required to develop FGS in contingency operations and it is unclear whether these have been developed since 2008. At present the current SOFA agreement between the US and Afghanistan allows the US to escape any liability for pollution.

While military environmental protection policies have improved somewhat since their Cold War nadir, there are historically justified concerns relating to environmental quality around ISAF’s properties. Of particular concern is the level of scrutiny available to the Afghan National Environmental Protection Agency (ANEPA) and their institutional capacity to verify ISAF data and monitor environmental standards around bases. Access to installations for ANEPA staff is crucial and at present the extent to which they have been able to access sites is unclear. Improved scrutiny also requires access to datasets from baseline and closure reports on environmental quality in and around the bases.

The lack of commonly agreed and enforced environmental standards among troop contributing nations is also of concern. National standards can vary enormously and the lack of commonality can provide cover for polluters, complicate assessment and can act as a barrier to accountability. As ISAF and NATO will ultimately bear political responsibility for environmental pollution around its installations it is surprising that they have not responded with more alacrity to the issue. While developments in green energy or waste processing on bases have been visible in ISAF publications, without greater transparency on environmental data and clearly defined legal standards and obligations they could be construed by opponents as greenwash.

Beyond the military, there seems to be little or no agreement on environmental standards and liabilities for the large number of PMSCs that support ISAF’s deployments. Vague suggestions that contracting nations bear liability can be found but formal agreement are lacking.

New agreements ahead but what about historic damage?

From 2015, it is hoped that the US-Afghanistan Bilateral Security Agreement (BSA)17, the Philippines18 and Panama19. Vague wording within agreements has previously allowed the US to return highly contaminated bases to host nations, leaving these nations with no forms of redress. US base closures in Germany after 1990 were an exception, where strict German environmental laws forced the US to decontaminate bases prior to their return.20

Importantly, if agreed in its current form, the BSA only enters into force after 2015 and the existing draft does not mention retrospective accountability. Given that the majority of US base closures will have taken place or are intended to take place before the end of 2014, this is a significant policy gap that must be addressed.

NATO21 is also in the process of negotiating a SOFA with Afghanistan, however this process has been held back awaiting confirmation of the BSA.

As noted above, while the text of ISAF’s UN Security Council mandate has lengthened during the last decade, environmental considerations are conspicuous by their absence. This autumn will see fresh negotiations to extend the mandate and the Toxic Remnants of War Project believes that this presents a useful opportunity to introduce environmental language. Ideally this would clarify liabilities and encourage a common environmental standard among contributing nations. It should also ensure improved access to environmental data for ANEPA and ensure that they have sufficient capacity to scrutinise pollution issues related to ISAF’s operations. The TRWP would like to see those ISAF contributing nations with the strongest national policies  promote the inclusion of environmental language in the mandate and push for a common ISAF policy.

Military pollution from ISAF’s activities has the potential to impact the health and well-being of Afghan civilians and leave a legacy of pollution that the Afghan government is poorly equipped to manage. As NATO will bear political liability for any health and environmental legacy it is in its own interest to ensure that common standards are agreed and responsibilities clarified.