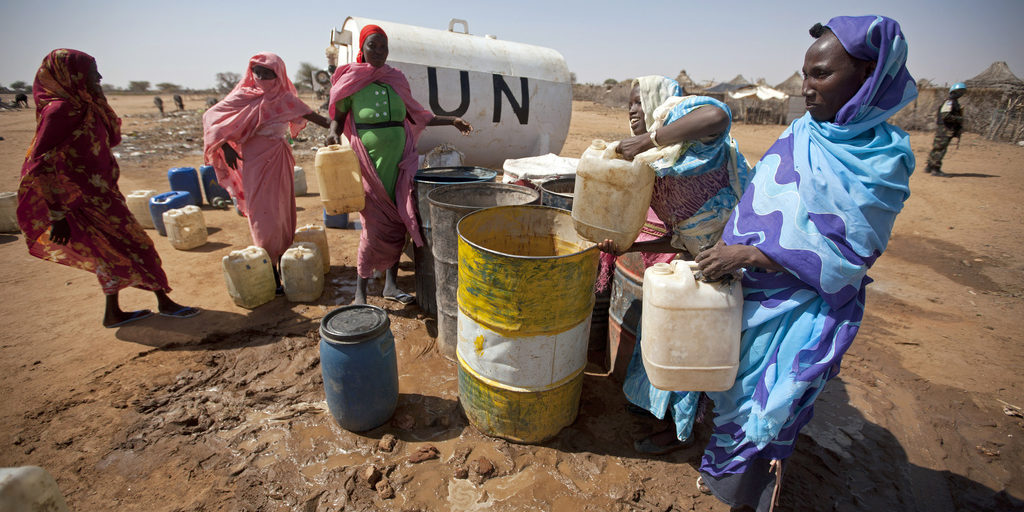 If environmental security means acknowledging the relationships between different environmental and social factors, why are we building siloes in our advocacy work?

With a growing number of individuals and organisations working on environmental security, and on a range of international, regional and domestic initiatives, it’s perhaps a good time to examine whether we are working effectively. This blog takes a step back to consider why greater civil society collaboration on environmental security is not only timely but vital.

Earlier this year, we were lucky enough to take part in two expert meetings on environmental security themes. The first considered conflicts in drylands, the second, water and armed conflicts. Contributors included academics, practitioners, lawyers and NGOs, and between them they discussed climate, water, resource management, peacebuilding, international humanitarian law, human rights, and domestic and international politics. At both events there was enthusiasm for converting knowledge into policy change, and each demonstrated the clear linkages and inter-relationships between these different themes.

There are an increasing number of events of this kind each year. And they are attended by a growing cohort of individuals, with a diverse range of specialisms. Their growth has been facilitated by the breadth and fragmentation of environmental security, or conflict and the environment. Yet such is the fragmentation, not only has it become difficult to keep track of the field, but those proposing political solutions to particular thematic issues are now at risk of advocating for duplication. This is particularly so at the level of the UN Security Council, where many of the solutions proposed for enhancing both water and climate security look rather similar.

Not only are our proposed solutions beginning to look similar, but our numerous frames and our focus on thematic issues also risk creating silos. This is perhaps ironic given that siloed thinking has been a perennial bugbear for many who have sought to promote and mainstream the environment in conflict and security settings. Moreover, our silos don’t reflect the real world complexity of a conflict like Darfur, where climatic, hydrological, agricultural and social and political factors created a complex web of interactions.1 And, while the silos have the benefit of allowing us to scrutinise individual factors in increasing detail, without better communication and coordination between us we may miss opportunities to effectively articulate both environmental problems, and political solutions.

Meanwhile, and in a further blow to siloed thinking, the states that hold the key to progress on environmental security are engaged in what is becoming a form of “Great Game”. Profound disagreements over the role of the environment in security policies, which were present before the topic ever began to be considered at the UN Security Council but which have developed further during the last decade, are now influencing processes elsewhere.

These divergent views are documented in detail by a recent SIPRI working paper on the positions of the P5 on climate security, while the negotiations on last year’s UNEA-3 resolution ‘Pollution mitigation and control in areas affected by armed conflict or terrorism’ were a good example of how they are manifesting beyond the Security Council. While the UNEA-3 resolution was ostensibly about conflict pollution, the majority of red lines held by states during the negotiations reflected the tensions in this environmental security Great Game. Could environmental degradation be linked to insecurity? Where should the environment fit in the UN’s conflict prevention mandate? Should climate security feature in a resolution on conflict pollution? In addition there were also the traditional objections to transboundary pollution issues, and an unwillingness to contribute to further defining environmental human rights.

This all poses a challenge to effective advocacy on conflict and the environment. We were at UNEA to talk about conflict pollution but instead found ourselves scrambling to provide states with agreed UN language on far broader themes – and we were grateful to contacts at SIPRI, Adelphi and elsewhere for their swift responses to our urgent emails from Nairobi. But, while this served to illustrate that our community has strength in knowledge, it also begged the question of whether we are using it as effectively or as strategically as we might. This is important because it is increasingly clear that the outputs from the various ongoing processes on conflict and the environment at the UN have the potential to be mutually supportive or, conversely, counterproductive for others.

In the case of the UNEA-3 conflict pollution resolution, it was language in the 2017 UN Security Council resolution on Lake Chad that unblocked the deadlocked negotiations. Similarly, for UNEA-2, its resolution on conflicts helped encourage the continuation of the work of the International Law Commission on the ‘Protection of the environment in relation to armed conflicts’. But, with the UNEA-3 resolution also addressing water, IHL, rights and natural resources, it seems important to consider whether more could have been achieved with the text to ensure that it reinforced the work of those engaged with these topics beyond UNEA: something that could have been facilitated by more effective coordination between civil society organisations working on environmental security.

The principle that work to address security or environmental challenges is best done collectively is hardly revolutionary. One need only consider the achievements of the humanitarian disarmament campaigns on mines, cluster munitions or nuclear weapons, or the civil society networks on environmental threats such as waste and toxics. And, given the considerable knowledge and expertise of those working across the field of environmental security, there seems to be no shortage of individuals and organisations that could collaborate. Similarly, there may well be others beyond the immediate community who would be willing to get involved. For instance, the engagement by a number of NGOs on the call by the Toxic Remnants of War Network for last November’s #EnvConflictDay was perhaps indicative of the growing interest among civil society on conflict and the environment themes.

Collaboration could also help to bypass some of the mandate limitations that different entities face. And, by bringing in different perspectives, also help result in the development of more effective strategies. Academics, think tanks, practitioners, NGOs all have complementary but often different roles to play, and which should be reinforced by the voices of those directly affected by the environmental dimensions of conflicts. Partnerships should also be deepened with relevant international organisations, and with progressive governments.

A major challenge for any undertaking of this kind will be reaching consensus on a common objective or objectives: relatively easy for a single issue disarmament campaign, more complex for a broad environmental security platform. But perhaps the approach taken by the International Law Commission could be instructive here. The Commission took a temporal approach, considering the environment before, during and after conflicts. Such a temporal framework could provide inspiration for a series of discrete but linked objectives, dispersed across different UN fora and processes. As many have suggested, pre-conflict this could mean focusing on the environmental elements of conflict early warning and prevention at the Security Council. During conflict, initiatives should address the weak IHL legal framework, monitoring and compliance. While post-conflict objectives could be addressed through a number of UN avenues, and consider assistance mechanisms, national reporting and action plans, and environmental and human rights norms and obligations.

Looking back over the progress of the last few years, a number of things are readily apparent. Firstly, the unavoidable interplay between the different components of environmental security poses a challenge to our narrow frames and siloes. Secondly, there is a pressing need and appetite to translate knowledge into policy change. Thirdly, individual UN processes do not exist in a vacuum but can sometimes profoundly influence other, seemingly unconnected, initiatives. And finally, advocacy and policy change across all of our themes remains at the mercy of wider questions of how states define environmental security. Together these observations could inform an initial framework for cooperation and collective strategising.

The overarching aim of any collective initiative should be that efforts by civil society, international organisations and states across all of our fields complement and support one another. This will inevitably require greater cooperation than at present but if we want to avoid fragmentation and siloes, make the best use of our collective – and finite –  resources, tackle the environmental security Great Game, and achieve lasting progress that benefits people and planet, we need to look again at how we operate together.

Doug Weir is Research and Policy Director at The Conflict and Environment Observatory.