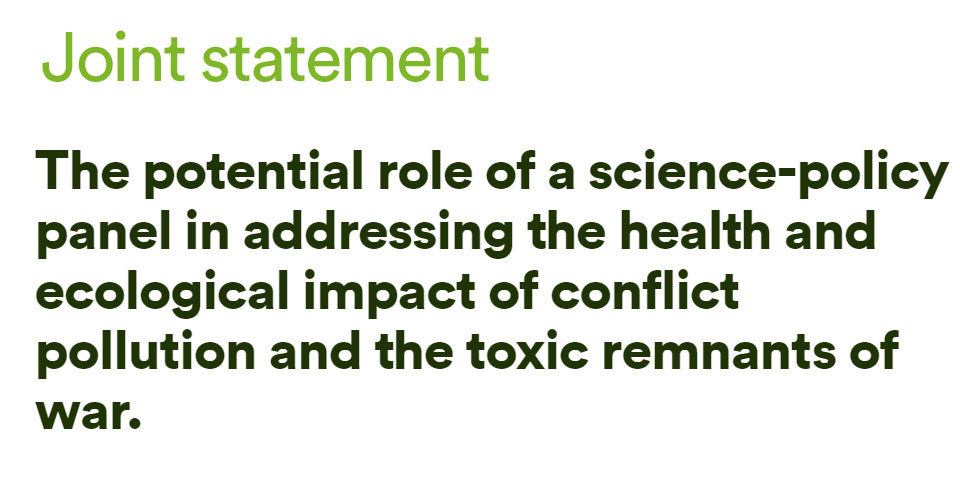 The potential role of a science-policy panel in addressing the health and ecological impact of conflict pollution and the toxic remnants of war.

Delivered by CEOBS on behalf of six organisations at the Open-Ended Working Group on a Science Policy Panel (OEWG 1.1) on October 6 2022.

Our organisations welcomed UNEA-5’s adoption of resolution 5/8 in March 2022, and the decision to establish a science-policy panel to contribute further to the sound management of chemicals and waste, and to prevent pollution.

Armed conflicts generate pollution and create and sustain the conditions where polluting practices can go unchecked. By destroying environmental governance, and constraining sustainable development, over time pollution can cause more premature deaths than armed violence itself.

We believe that an intergovernmental science-policy panel on chemicals, waste and pollution could contribute to reducing the health and environmental burden of pollution in fragile and conflict-affected states.

Countries affected by armed conflicts typically suffer from pre-existing pollution and waste management issues, which are often exacerbated during and after conflict as environmental governance collapses. Conflicts themselves often generate new sources of pollution, for example through damage or disruption to industrial infrastructure, urban areas or the use of particular weapons. Governance collapse also impedes the implementation of international agreements on chemicals and waste.

The conflict in heavily-industrialised Ukraine, has drawn attention to the relationship between armed conflicts and pollution, with independent monitoring identifying damage to buildings, industry and infrastructure causing serious risk of pollution incidents and long-term environmental harm. Unfortunately, these risks are not unique to Ukraine.

Conflict pollution and the toxic remnants of war are receiving growing attention. In 2017, UNEA adopted resolution 3/1 on Pollution mitigation and control in areas affected by armed conflict or terrorism, the first UN resolution dedicated to conflict pollution. At UNEA-4, resolution 4/8 highlighted the challenge of solid waste management in conflict-affected states.

Next month, governments will adopt a new legal framework on the Protection of the environment in relation to armed conflict at the UN General Assembly. The framework establishes principles on the management of the toxic and hazardous remnants of war, on access to information on pollutants, on reducing pollution risks around military facilities and on state responsibility for environmental damage.

The proposed science-policy panel could play an important role in building and sustaining attention on the health and ecological risks of conflict pollution. The panel could also be of critical importance in encouraging research into the health and ecological burden of conflict pollution, in highlighting the need for environmental and epidemiological research in affected areas, and for victim assistance and environmental remediation.

We strongly encourage the proposed science-policy panel to address conflict pollution and the toxic remnants of war, and urge delegations and other stakeholders to support a future panel in this endeavour. UNEP’s current medium-term strategy states that work on conflicts will be mainstreamed across its core focus areas, including action on chemicals and pollution. In this respect, we also urge UNEP to use the proposed panel as a vehicle to support this aim, and as part of the implementation of resolution 3/1. Our organisations stand ready to assist and support this process.

This joint statement was delivered on behalf of the following organisations: