NATO emissions: Count them, cut them 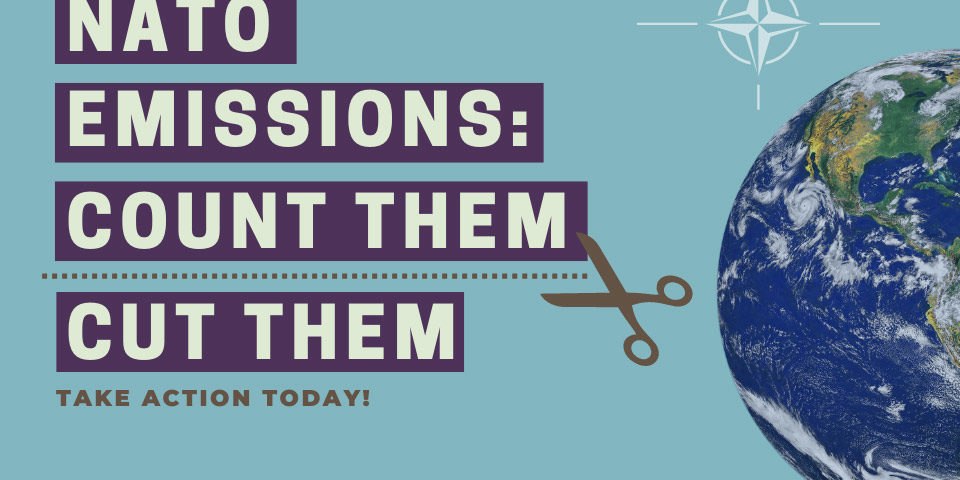 In June, NATO set a dangerous precedent by refusing to say how it will count the emissions that it produces. As Ellie Kinney explains, the military contribution to the climate crisis has escaped scrutiny long enough and ahead of COP27, our new campaign urges NATO to demonstrate leadership, not entrench greenwashing.

“Climate change is making our world more dangerous”, NATO Secretary General Jens Stoltenberg said at a round-table on Climate, Peace and Stability at COP26 in 2021. “So, climate change matters for NATO because it matters for our security, and NATO is now addressing these challenges.” Since COP26, NATO has agreed on its NATO 2030 agenda, which puts climate change firmly alongside threats like terrorism and cyber-attacks, and seeks to position NATO as a global leader in climate action.

At the NATO Summit in Madrid this summer, Stoltenberg announced plans for the organisation to reduce its greenhouse gas (GHG) emissions and to work towards Net Zero by 2050. He said that the organisation’s GHG emissions will be tracked and monitored using a new methodology, developed by NATO. According to Stoltenberg: “It sets out what to count and how to count it, and it will be made available to all Allies to help them reduce their own military emissions.”

It’s no wonder then, that media outlets began to praise NATO for their bold commitment. As Stoltenberg had said back at COP26 in November 2021, “There is no way to reach Net Zero without also including emissions from the military,” and now NATO was taking action. Or was it?

But June’s Madrid Summit announcement wasn’t quite as historic as climate advocates might have liked. Amidst media confusion over a deliberately ambiguous statement, it emerged that NATO’s Net Zero pledge applies simply to NATO as an institution and not to the militaries of its members, so just a few offices, installations and other assets. Furthermore, the methodology has not yet been made public, fuelling even more ambiguity around the commitment. If NATO is ready to be a global leader on climate action, why are its commitments hiding in the shadows?

Since this methodology has not yet been made available to the public, we have no way of knowing how far NATO’s commitment goes, or how it plans to achieve Net Zero. According to the Intergovernmental Panel on Climate Change, we need deep and immediate cuts in emissions across all sectors to limit warming to 1.5°C. We don’t have time for empty promises.

No to military grade greenwashing

NATO’s refusal to publish its methodology for counting emissions sets a dangerous international precedent. Countries are still excused from comprehensively reporting their military emissions to the United Nations Framework Convention on Climate Change. As a result, the sector is lagging behind and leaving a huge blind spot for global climate action – the Military Emissions Gap.

Some militaries are starting to set Net Zero targets, like the US Army and the UK RAF, but without accessible and comparable data, and with no means to track their progress, these targets risk being little more than military grade greenwashing. We can’t let NATO set a global standard of secrecy around GHG emissions.

We need a global coalition of organisations to join us and demand credible climate action from NATO. So today we’re launching a new campaign:

The COP where we began talking about conflict emissions
December 15, 2022
Browse by Country
Blogs by Topic
Subscribe