New study on infrastructure damage in Gaza and the West Bank 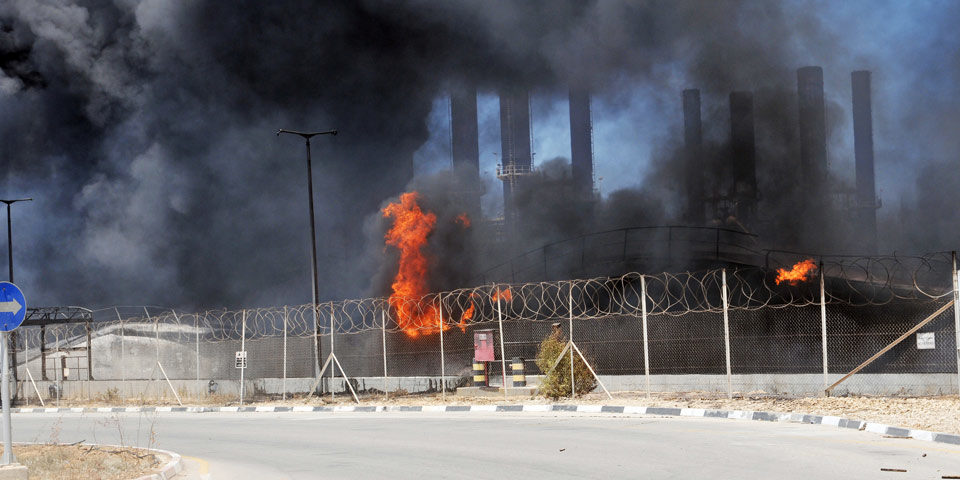 “Held hostage to the conflict”: Study examining the targeting of infrastructure finds ‘slow violence’ in the West Bank and ‘extensive destruction’ in Gaza.

With the Israeli occupation of the West Bank and Gaza Strip entering its sixth decade, a peace settlement looks increasingly unlikely. A new study looks at the impacts of the prolonged occupation and periods of violent conflict on the infrastructure and livelihoods of Palestinians. In this blog, Leonie Nimmo reviews the study and adds CEOBS’ environmental commentary.

The targeting of water, energy, and agricultural infrastructure has created vulnerability and undermined livelihoods in the West Bank and Gaza Strip, according to a study published in the International Affairs journal in February 2019. Authors Weinthal and Sowers found that the targeting of infrastructure has helped to “create a humanitarian crisis in Gaza and a fragmented, donor-dependent series of encircled enclaves in the West Bank”. They argue that the destruction of civilian infrastructure has long-term ‘reverberating effects’, causing damage to human welfare and ecosystems.

The study1 is part of a wider project examining the causes and consequences of destruction and degradation of infrastructure in conflicts across the Middle East and North Africa (MENA). It draws on an original database of nearly 1,000 incidents of targeted infrastructure over ten years. The research included interviews with representatives of NGOs and government officials, one of whom claimed that in the Palestinian territories “infrastructure has been held hostage to the conflict”.

The research adds to the growing body of evidence of the impact of the prolonged Israeli occupation and recurrent periods of violent conflict on the livelihoods of Palestinians. A 2018 study describes Gaza as being in a “state of emergency” due to its water crisis. In 2012 the United Nations published a report questioning whether Gaza would be a “liveable place” by 2020.

The Israeli military’s involvement in the occupied Palestinian territories is augmented by a civil administration, which was created by the Israeli state in 1981. Though subordinate to the military, its aim was to institutionalise ‘the separation of direct military action from the administrative control of Palestinian life’.2 Alongside these institutions, Weinthal and Sowers highlight Israeli settlements as playing a role in the direct and indirect targeting of infrastructure in the West Bank and Gaza Strip. The authors note that legal restrictions on infrastructure development, the expropriation of Palestinian land and the restriction of Palestinian movement have deepened Israeli control over Palestinian livelihoods.

The study highlights differences in the mechanisms of control between the West Bank and Gaza Strip, finding that the decline in living standards in the West Bank has been less precipitous than in Gaza, deepening the physical and economic gulf between the two areas.

Israel withdrew its troops and the settlements from Gaza in 2005, whilst retaining control of the territory’s borders. In contrast, in the West Bank the Israeli government constructed a wall, which “carved more land… and expanded bypass roads, checkpoints and other physical means of entrenching Jewish settlements”. Annexing nearly 10% of the West Bank and involving a strip of land on average 60 metres wide cleared of all vegetation, the wall has had a huge environmental impact, from a landscape to a biodiversity level. Increasing areas of the West Bank have been covered in concrete as a result of its construction, expanding settlements and the settler-only road network. The stone for the concrete is often extracted from the West Bank from quarries that also create environmental problems.

Infrastructure targeted in the West Bank

Weinthal and Sowers argue that the targeting of infrastructure in the West Bank is a form of slow violence, with adverse impacts accumulating over time. The database behind the study records 685 incidents between 2006 and 2017. Of these, 75% targeted the agricultural sector, 20% targeted water and 4% targeted energy infrastructure. However, the authors emphasise that “the impacts of targeting water, energy and agriculture are inextricably linked, owing to their combined effects on livelihoods.” It should be noted that the period covered by the dataset begins four years after the construction of the wall began, and therefore does not capture all of the consequences it has had on the West Bank’s infrastructure.

In all three sectors analysed, the targeting of infrastructure was conducted by both the Israeli state and by settlers, with the “vast majority” of agricultural incidents carried out by Israeli settlers. The research reveals land expropriation and annexation, with the wall cutting agricultural land off from water supplies. Nearly 70% of incidents in the agriculture dataset involved olive and fruit trees. Damage, demolition and theft of water and energy infrastructure were coupled with “forms of slow violence” which prevented investment.

Reconstruction of infrastructure in the West Bank is made difficult or impossible by the Israeli state’s operation of a permit system, which requires approval for any infrastructural work, including maintenance. The authors contend that: “the deliberate obstruction by bureaucratic means… is a form of indirect targeting of essential infrastructure that undermines human security.” The environment is also undermined, for example, deterioration in water infrastructure affects both irrigation and sanitation.

Infrastructure targeted in the Gaza Strip

The study notes that the “besieged enclave” of the Gaza Strip has experienced four periods of violent conflict in the last ten years, during which time civilian infrastructure has been extensively targeted. Reconstruction has been seriously restricted by a blockade of the territory. The research analysed 297 incidents of infrastructure being targeted between 2006 and 2017. The majority of these were split between the agricultural and fishing sector, which were combined in this dataset (49%) and the water sector (43%); while 8% related to the energy sector.

Nearly 70% of incidents in the agriculture and fishing dataset related to restrictions on access to productive fishing waters. According to a source quoted in the report, Israel has restricted Palestinian fishing to as little as 3 nautical miles from the shore, far less than the 20 nautical miles required by the Oslo Accords. Fishing close to the shoreline depletes stocks in shallow fishing grounds: between 2008 and 2011 catches reportedly declined by 90%.3

The report points to several factors that have negatively affected agricultural production in the Gaza Strip, including restrictions on imports, the uprooting of trees and preventing farmers from accessing land and wells. Tracked vehicles have also damaged arable land through repeatedly compacting the soil, with almost one third of Gaza’s arable land reportedly affected by this in the 2008-9 conflict.4

The water infrastructure in Gaza has been extensively destroyed. Spikes in incidents during periods of conflict “reflect the particular targeting of water infrastructure by Israeli air campaigns,” according to the report. It quotes a UN study which found that “access to safe drinking water in Gaza through the public water network plummeted from 98.3 per cent in 2000 to a mere 10.5 per cent in 2014″.

Energy generation in Gaza is centralised in one power plant, which was bombed by the Israeli Defense Forces in 2006 and 2014, “dramatically cutting power supplies” according to the study. Restrictions on fuel imports have also shut down the Gaza power plant. The report notes that this has knock-on effects, shutting down water treatment and sewage plants. Compromised water treatment facilities have led to sewage outflow into the sea. In turn this has led to the shutdown of an Israeli desalination plant and beach closures. The Gaza blockade has also prevented reconstruction of water and sanitation projects and desalination plants, which has “contributed to the continuing deterioration in water quality and overpumping of the coastal aquifer.”

The environmental impacts of the protracted conflict on Gaza are thus most acute in terms of water. Pollution of the marine environment, groundwater contamination, and the loss of access to treated water carries with it the greatest impact on the health of the population.

Weinthal and Sowers state that at the outset of the occupation in 1967 water and electricity infrastructure in the West Bank and Gaza Strip were integrated with those of Israel, whilst sanitation and waste disposal were left to the Palestinian authorities. Further analysis of the situation with regard to waste is not presented, and the study does not refer to pollution. Nevertheless, these are infrastructure issues that can have major environmental consequences.

In 2015 the Applied Research Institute-Jerusalem reported that six operational sanitary landfills in the West Bank and Gaza Strip received 50% of the generated solid waste, whilst 50% was disposed of in “100 unsanitary dumpsites, vacant lots and remote areas”: 5% of Palestinian localities were reported to be without solid waste collection services. In addition to uncontrolled Palestinian waste, the West Bank (with inadequate environmental regulations) also suffers from the dumping of waste from Israeli settlements and the exploitation of landfill sites for Israeli rubbish.

Land and water in the West Bank are also polluted by untreated sewage from Israeli settlements: 19 million cubic meters per year according to the Knesset Research Institute (cited on Al Jazeera). Meanwhile chemical pollution from Israeli settlement industries  also has serious impacts on the environment and health of Palestinian communities.

Infrastructure damage during periods of violent conflict and prolonged occupation has direct environmental consequences, which in turn impacts human health and livelihoods. In the case of the Occupied Palestinian Territories, this is compounded by the prevention of reconstruction.

International Humanitarian Law’s (IHL) rules on belligerent occupation oblige the occupying power, in this case Israel, to restore and ensure public life. A ruling by the Supreme Court of Israel has subsequently found that this obligation encompasses “a variety of aspects of civil life, such as the economy, society, education, welfare, health, transport and all other aspects of life in a modern society”. Persistent damage to critical infrastructure undermines many of these aspects of civil life, violating the human rights of Palestinians. The prospect of this obligation being used to enhance the protection of the environment in situations of occupation was examined by the International Law Commission last year.

For Gaza’s recurring periods of conflict, IHL prohibits attacks which are “expected to cause incidental loss of civilian life, injury to civilians, damage to civilian objects, or a combination thereof, which would be excessive in relation to the concrete and direct military advantage anticipated”. According to the International Committee of the Red Cross (ICRC), this rule on proportionality is increasingly interpreted to mean that attacking parties must take into account the foreseeable “reverberating effects” of an attack. They note that the destruction of essential civilian infrastructure can result in civilian death and injury that may far outweigh the immediate civilian casualties.

Sowers and Weinthal argue that “targeting infrastructures that support water and energy supplies, and agricultural and fishing livelihoods, has made Palestinian places increasingly less habitable and Palestinian civilian life increasingly precarious.” But it is also clear that the impact of these policies on the environment threatens the long-term viability of life in the West Bank and Gaza.

Leonie Nimmo is a Research Associate with CEOBS.

Keen #UNSC observers will note few big surprises in these positions. But it's encouraging that states are engaging (credit to Niger for organising). It's also clear that with so many issues at play, there's a pressing need for a coherent Environment, Peace and Security framework.

Ambassador Dang Dinh Quy, head of the Vietnamese mission to the UN, called for the compliance with international humanitarian law, including duties re... India said that in many cases, perpetrators of environmental degradation may well be “outside national boundaries” while the people suffer...

Russia remained unconvinced of a need for a role for the UNSC on matters climate or environmental, and also took a very pessimistic view of the ability of #IHL to prevent environmental damage in conflicts 9/12

Mr. President, I thank the President of the International Committee of the Red Cross, Mr Peter Maurer; The Executive Secretary of the UN Convention to...

Nordic Joint Statement on the Humanitarian Effects of Environmental Degradation

Nordic Joint Statement submitted by Ambassador Martin Bille Hermann at the High-Level Open Debate of the UN Security Council on the Humanitarian Effec...